New livery for the MSN2, the first flight prototype with cabin interior equipped


With the first pictures of the MSN2, we can confirm that a new livery for this aircraft –and very probably for the MSN5- is going to be shown in coming weeks. The MSN2 is the 3rd prototype that will join the certification flight-program on the first weeks of 2014 and it is the first prototype with cabin interior equipped. 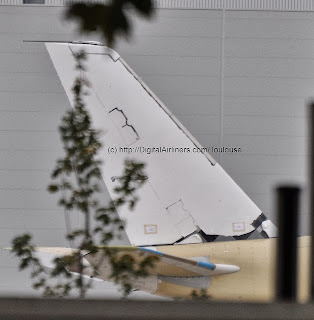 In the pictures currently available, the “A350” words are painted in white letters in the Vertical Tail and will be highlighted on a black background. The vertical tail plane for MSN2 has been “protected” after been painted and until the complete aircraft goes to the paint shop, we will not be able to watch the new livery. The wing and the horizontal tail will remain in grey-white color as for the other prototypes and the new black painting scheme will probably be applied to the half of the fuselage, being the rear part of the fuselage in black and more & more white until arriving to the nose fuselage that will be in the “standard” white. 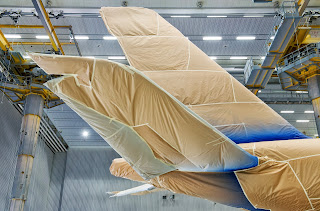 MSN1 Vertical Tail when it was painted 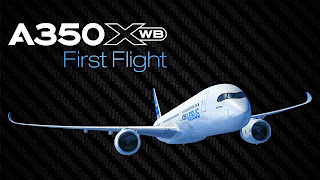 The black painting would simulate carbon fiber structure as shown in the picture above. 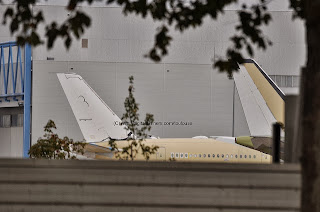 Winglets, one of the identity brand of the aircraft will probably be painted in this “carbon-fiber” black. And the nose fuselage will be identical than the other prototypes.


The 3 modules of the crew rest compartment have already been installed in the rear part of the fuselage in the MSN2. And the cabin activity will increase in coming weeks in the station 20.

The MSN5, the second cabin equipped aircraft will probably be painted with the same livery than the MSN2. These two aircraft will be used for different tests and also they will participate in the A350 road-show all around the world in different air shows.
Posted by Blogjfa at 10:20 PM