Airbus proposes a standard 18in (45cm) seat in order to try to compete against the Boeing 777X before it is launched. “A350-1000 offers better-quality rest than 777X” is the message.

Airbus is promoting comfort benefits from a broader seat width in a campaign which appears to be a pre-emptive strike on the impending launch of Boeing’s 777X. 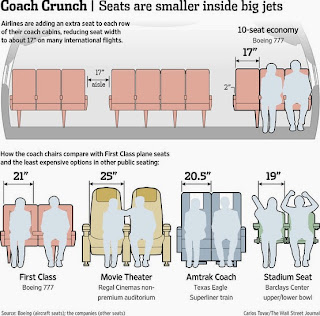 But the 10-abreast configuration requires 17in (43cm) seats, and Airbus has unveiled research which, it claims, supports its view that a wider seat offers better-quality rest.

Airbus is using the research findings to underline the benefit of its standard 18in seat, which the airframer fits to the 9-abreast A350 as well as the 8-abreast A330. 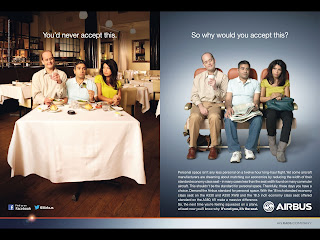 The 777-300ER has a wider fuselage than either type, which enables it to accommodate the 10-abreast layout by sacrificing seat width – thereby providing additional revenue and improving the per-seat economics. 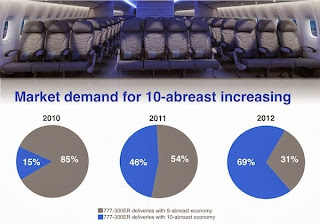 Emirates, the largest operator of the 777-300ER, configures the type with 10-abreast seating, and Boeing argues that the demand for such configurations on the aircraft is increasing; from 15% in 2010 to 69% of all 777-300ER deliveries on 2012 were 10-abreast layouts.

But Airbus says the air transport sector should adopt an 18in standard for long-haul flights, and has presented a study undertaken in co-operation with the UK’s London Sleep Centre to back the call.
The polysomnographic test was really limited, involving only six passengers in a simulated cabin.
Recordings of physiological sleep measurements suggested that, when using an 18in seat against a 17in seat, the onset of sleep came 6min earlier and brainwaves showed fewer and less-frequent disturbances. 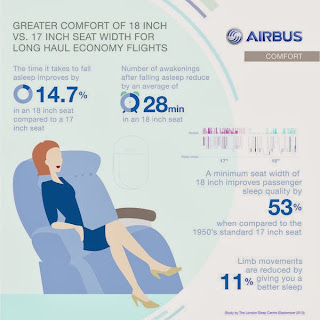 "Compared [with] the 17in seat... there’s hardly any disturbances in brainwave patterns particularly in the first half of sleep where we have most of our deep-sleep period," says London Sleep Centre medical director Irshaad Ebrahim. "The different sleep stages... mimic what we’d find in a normal sleep in our own bed."

Airbus head of passenger comfort Kevin Keniston refers to the 17in width as the "crusher" seat, but rival Boeing scorns the airframer’s campaign. 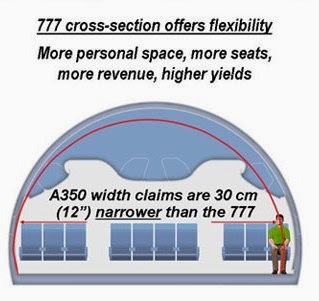 "I'm surprised by our competitor coming out with an arbitrary, obviously self-serving standard for the industry," says Boeing Commercial Airplanes senior vice-president for global sales John Wojick, pointing out that its customers can select various seat widths – including 17.5in and 18.5in – for their aircraft.

"Our objective is to provide the travelling public with a value choice. Many people are very price sensitive and they're looking for the opportunity to go visit family, friends or a vacation site, and they're price sensitive – even if that means sitting in a 17in seat."

Wojick points out that Airbus has conveniently selected its own 18in seat width as the baseline for an industry standard, adding: "Why not demand that everybody has a first-class seat?" 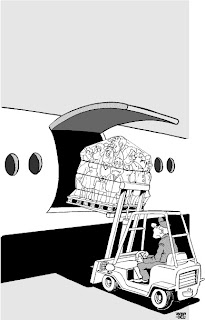 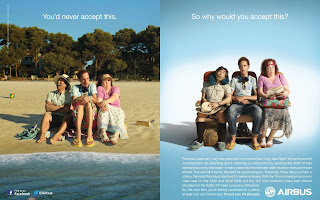 Based on the article “Airbus and Boeing spar over seat-width benefits” published in FlightGlobal
Posted by Blogjfa at 7:13 PM