The tail-skid ready in the MSN1 for starting VMU tests in coming days.


Externally the MSN001 has hardly changed after her return, only a tail skid under the structurally reinforced & prepared rear fuselage S.19 has been installed. 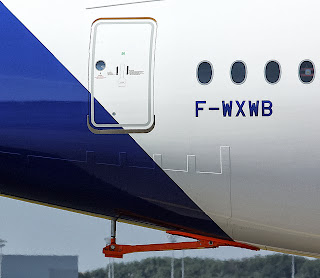 This specific tail bumper is added to protect the tail from any damage during the VMU tests (Velocity Minimum Unstick).

Airbus needs to know the VMU because the computed take off speeds incorporate some margin above VMU, just as they also do for VS (Stall speed), VMCG (Minimum control speed on the ground) and VMCA (Minimum control speed in the air). These “V” speeds therefore form the basic building blocks of take-off performance. 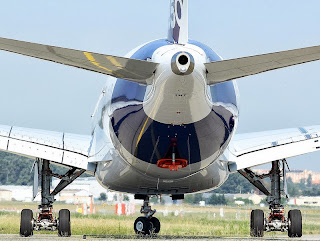 Many videocameras and other FTI devices (specially in the wing) have been installed.

For crew members, these are one of the most stressful tests, as the risk of damage to the aircraft is rather high, although the section 19 is structurally-reinforced to sustain a force up to more than 150 tons. Few pilots can say that they have performed VMU tests on several programs without damaging anything! The VMU tests are difficult to carry out, mainly because it has to perform a soft touch down of the tail bumper, as the structure is not designed for a strong impact. 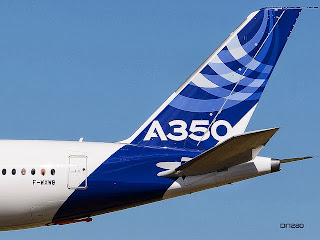 Perfect weather conditions are needed, with no turbulence and wind less than 5 kts, to insure the precision of the measurements. The tests will be performed at Istres Air Force Base (South of France) where there is a 5 km runway and no houses or other obstacles on the runway axis for several kilometers.

On A380, a total of 22 VMU tests were executed including both development and certification.