A350-800 can not be canceled because some customers are proving hard to convince to trade upward. US Airways decision is key.

Airbus has been openly reluctant to actually build the shorter A350-800. But it still holds 79 firm orders for the type, and some customers are proving hard to convince to trade upward. 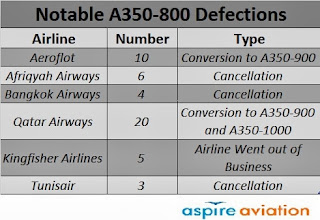 Russia's largest airline, Aeroflot, last week opted to convert 10 orders for the -800 into commitments for the larger -900 version, but still wants 8 of its original call for 22 aircraft to be the smallest A350 family member. The backlog for the -800 has already been cut by more than half in previous years.

Airbus has been encouraging its customers to give up their -800 commitments in favor of the larger -900 and -1000, but has had mixed success. A number of airlines continue to insist on the 250-seat aircraft (in three classes), because they believe they are unable to fill the larger variants.

The future of the type could very well rest on the decision of the planned merger of US Airways and American Airlines. With an order for 18 aircraft, US Airways is now by far the largest -800 customer, following by lessor Aircraft Purchase Fleet (12) and Yemen Airways (10). Hawaiian Airlines has bought six of the type and several other airlines have single-digit commitments. 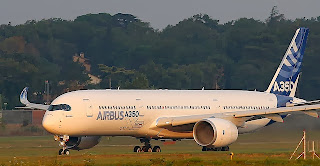 But if “New American” decided that the -800 no longer fits its requirement for the long-haul fleet, that might very well be a turning point for the program. 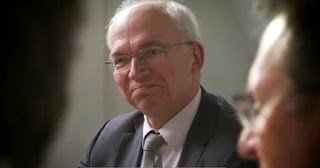 A350 program chief Didier Evrard said last week that “as long as the airlines show an interest, the aircraft will be built. It is not complicated for us to do it.” He said timing for first delivery was still “a moving target” because of the ongoing talks with airlines.

Evrard gave no indication when production of the -800 versions may begin but the first MSN allocated for the first A350-800 prototype could be after the MSN150.

Based on the article “Near Nowhere” published in Aviationweek
Posted by Blogjfa at 8:43 PM