The factory in Wales, where wings for all Airbus planes are built, reprogrammed the software that guides machines to drill 6,000 holes in each wing, and successfully shipped five units within five weeks in September and early October, Mr. Evrard Program Director said.

Construction of the A350 XWB wings differs from other Airbus jets, as the A350 wing lies flat during manufacturing, with a machine hovering overhead to perform the drilling. The A350 is largely built from lighter composite materials, making assembly more complex than with metal. Delivery of the wing slipped by a month because of difficulty drilling the holes, which are done by a robot rather than manually. 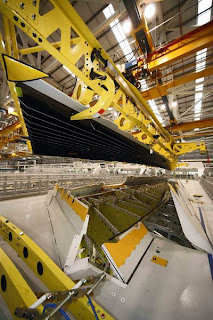 “This is a brand new process, it’s our first-ever horizontal build, the first time we’ve ever built a wing for a commercial aircraft in composites, and in the early sets we had some refinements to make to that drilling process,” Trevor Higgs, the head of A350 wings, said in an interview.

Wings for MSN001 are already at the FAL in Toulouse since last weeks of October and the junction to the fuselage is progressing well, in paralell with the systems installation work inside the fuselage and the job in the rear fuselage.