Engine Pylon, a critical subassembly manufactured in Toulouse, ready to be installed on the wings after wing-to-fuselage junction

Pylons for MSN001 are already in the FAL, waiting the wing junction to the fuselage in the Station 40 to be installed in the wings. 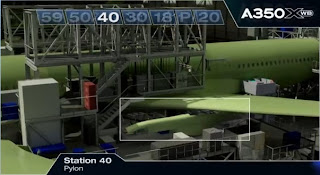 The Airbus Saint-Eloi site is responsible for delivering equipped and tested engine pylon to the FAL. Located in the Toulouse region, this facility’s main activities include the design of pylon and propulsion system integration; and the manufacturing of pylon and nacelle components, including hard metal transformation, pylon sub-assembly and pylon integration. Some complex machined aluminium detail components & subassys are manufactured by Magellan (UK) supplier -also in charge of other metallic parts for centre wingbox.

Saint-Eloi produces and delivers multiple types of engine pylons, equipping the entire Airbus family of aircraft as well as the A400M military airlifter. 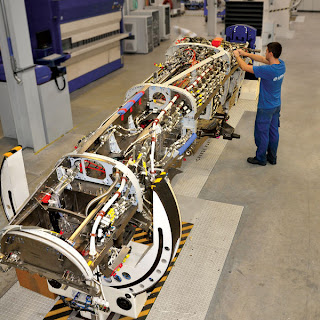 Engine pylon for MSN001: one of the most critical structure in the aircraft

Pylons are structures which hold the engine to the wing, so are one of the most important parts of the aircraft. They are a key element as they support all loads generated by the engine that in the A350 XWB, is the largest engine ever to power an Airbus aircraft. Effectively, the pylons, to which all the loads are transferred, are crossed by many different systems: hydraulic, fuel, electrical and air conditioning. This sort video gives a good idea of the complexity of the pylon. 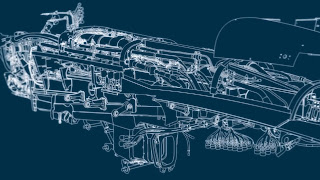 Another function is to retrieve all the heat dissipated by the engine, so they suffer sudden changes in temperature: going from -40ºC (cruising speed) to 300ºC (engine starting) and they also suffer very high vibrations. The pylons are composed of 90% of hard metals such as titanium; the rest of the components are essentially light alloys or composite materials.
Posted by Blogjfa at 10:15 PM