Trent XWB engine flight tests in A380 testbed just the tip of the iceberg. Certification and ramp up activities on going.

Customers have been reassured by the sight of a Trent XWB engine strapped to the wing of an A380 flying testbed. However, to Rolls-Royce this outward display of progress is just the tip of the iceberg as it works on certification and ramping up production of the first flight-test engines for the new twin.

Ramp up
As sole supplier for the A350, Rolls also knows that within six years the XWB engine will be produced at the rate of one per day—the fastest for any Trent. 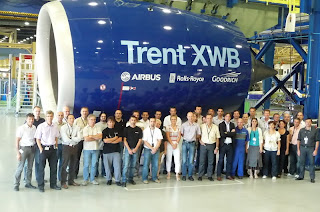 Airbus A350 XWB has a unique engine: Trent XWB by Rolls Royce.
For Rolls this means a high tempo of work on three fronts—certification, design and production readiness. “Overall we're pretty pleased with where the program is,” says Trent XWB program director Chris Young. Since powering up the first engine in 2010 and starting flight tests on the A380 flying testbed in February 2012, the program has aimed to incorporate lessons learned into the initial engines while clearing the round of certification tests in good time for flight tests on the A350.

The first set of engines for the initial A350-900, the first of the family to be developed, will be shipped to Airbus around the turn of the year.

The immediate focus is on ironing out potential issues in a specially developed pre-production area where Rolls is building the flight-compliance engines that will power the A350 test fleet. The work is vital to “proving out the industrial system,” says Young. “We're starting to get there in volume.” 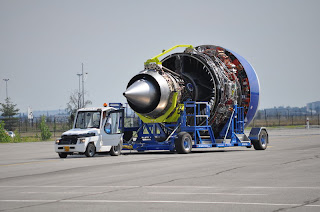 The Trent XWB has a larger fan -a diameter of 118 inches (3.00m)- than the Trent 900 of A380.
It is here that the company has put the final touches to a “training” Trent XWB, designated Engine 21001, as a key element of its preparations for the initial production standard flight-compliance engines to follow. “We invested in this specific engine, which is completely error-proofed and showed we could do it,” says Young. The engine has been used to prove tooling and train the fitters who have begun assembling parts for the first four flight-compliance engines. “Now that we've assembled it we will test it and take it apart again, and built it again several times. That way we are constantly improving our knowledge of how to do it.” Next, it will be handed to the repair and overhaul group for their input, he says.

Engines for Flight Tests:
In all, Rolls plans to make 16 flight-compliance engines, 10 of which will be dedicated to A350 flight-testing. One is the already assembled training engine, three will be spares, and a further pair will be built for contingencies.

Development:
“We've taken a middle bay in our maintenance, repair and overhaul site to replicate a full-scale production facility,” says Tim Boddy, head of XWB marketing. “Here we are testing pre-production best practices in a similar way to Bombardier's preparations for the CSeries, and we've taken lessons from automotive manufacturers like Toyota and Mercedes. We have even borrowed some of their guys to help us with Six Sigma [manufacturing improvement] practices.”

The pre-production phase is “a unique opportunity to construct the engine in a single space and get the overhaul guys who work here to come over and tell us about improvements for the XWB. It will speed up the maturation process,” says Boddy, who adds that the concept was “always baked into the plan.” Although previously tried out in airframe manufacturing, Rolls believes that combining experimental, production and MRO elements into the engine development at this stage, and at this scale, is a first. “We think this is the only dedicated pre-production facility for an aero engine in the world,” he adds. 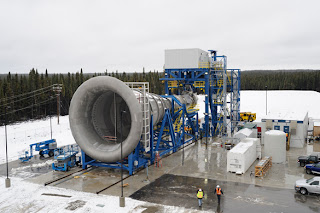 With certification imminent, there are few changes likely between the training engine and the final standard—which this unit will itself help define, says Young. “In the core engine, it is 99.95% to the final design standard. For the dressing [engine accessories around the exterior], it is probably 90% of the final standard. As always, you tend to find things for weight reduction and maintainability as you progress into production. So even now you can optimize the design,” he adds. Despite the dramatic strides in virtual assembly and digital design techniques, Young says that “there is nothing quite like a final physical verification. We are close to finishing the last [certification] test well before flight.”

One of the final checks was a strain-gauge test of the low-pressure turbine (LPT), which was completed in mid-October at one of the company's two indoor test sites in Derby, designated the 57-bed. This was done to confirm a minor redesign of LPT aimed primarily at durability improvement, and it followed earlier tests using X-ray images of the engine while running at cruise condition. “We found the blade position was not quite adjusted right and we produced a 0.95% specific fuel consumption (SFC) improvement by changing shims,” adds Boddy.

The certification finale is the dramatic fan blade-off test, which will be conducted in the adjacent 58-bed. A final spin rig test to clear the way for the blade-off evaluation is due to be run soon in Germany. The blade-off test, in which a fan blade is deliberately detached while the engine is running at maximum thrust, will take place “a few weeks after” the test in Germany, says Young. The timetable “assumes we have nothing to analyze from it,” he adds. 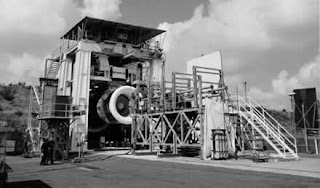 Other big-ticket certification tests such as medium- and large-flock bird-strike evaluations were completed earlier this year. “Both passed perfectly, and we just finished certification tests on the bill of material following the 150-hour triple-red-line test,” Young says.

Based on article "Final certification tests loom as first Trent XWB rolls out of pre-production site" published in Aviation Week
Posted by Blogjfa at 9:26 PM