The test-bed A350 XWB - known as "aircraft zero" - has started its virtual first flight (VFF) program, which Airbus describes as "a key step in the final preparation for the actual first flight of aircraft MSN001 by the middle of this year". 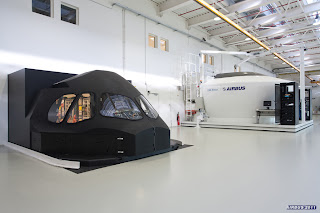 "Aircraft zero" is, in its own way, real: it is the linking of the "iron bird" electric, hydraulic and flight control test bench with a flight deck integration simulator. The manufacturer explains: "This provides the closest core system test environment to the effective first flight of MSN 1. For this campaign, aircraft zero is equipped with a standard of equipment fully representative of MSN 1's first flight."

Airbus continues: "The campaign, set to last for several months, has two main objectives. The first is to prepare for first flight, by simulating normal and abnormal operational scenarios prior to first flight, verifying the aircraft systems and handling aspects. The second objective is to ensure maturity by detecting and resolving potential issues as early as possible. The VFF campaign will also allow the flight crew to fully prepare for the first flight and the subsequent flight test program."

Based on the article “Virtual first flights for the A350” published in Flightglobal
Posted by Blogjfa at 10:47 PM