The objective to flight in Le Bourget more than challenging; "It is a possibility, but not a probability," But the certification schedule even more challenging than the first flight.

Based on a visit to the A350 FAL last Friday 1st of February of the journalists from the Press Association Aviation (AJPAE) with Airbus CEO Fabrice Bregier, the A350 schedule seems to be specially challenging, and as written by Les Echos  “especially because of the delays by a supplier” , called Spirit. 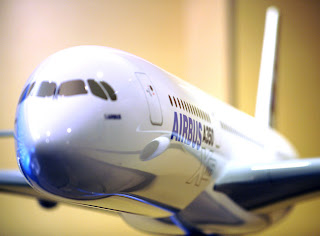 A little more than 5 months of the Le Bourget Airshow, the first aircraft of the A350 being assembled, still seems far away from the first flight.


Ground Tests are ongoing on MSN1 at station 30 inside the FAL. Many indoor ground tests continues  to demonstrate the readiness of systems and identify any defect in this phase before the aircraft moves to the next station. In these test, all type of systems are checked, as air conditioning, electrical systems and hydraulic systems. Another test for which no photo is available yet is the typical main landing gear extension-retraction test. The MSN1 will go for painting and Rolls&Royce engines installation and afterwards, an extensive set of outdoors ground tests will be required. 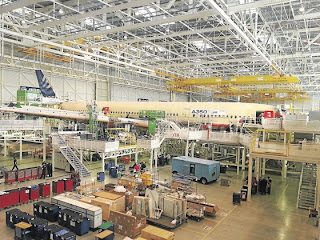 
Given these steps, it is very unlikely that the A350 would be ready before the summer and making a first appearance at Le Bourget show, 17-23 June. Without excluding it totally, Fabrice Brégier, CEO of Airbus, acknowledges this himself: "It is a possibility, but not a probability," he said. "On the other hand, I commit to what the first flight did not take place in Toulouse during the show", he added jokingly.


However, the most striking during the visit to the FAL was the absence of other items except the MSN1 in the assembly line. The station 50, where are assembled sections of fuselage from Saint-Nazaire and Germany, was completely empty. Same thing in the station 40 where wings from Great Britain are fixed. According to information gleaned on site, the assembly of the sections of the MSN3 will begin "in the coming days”. However they were originally planned for December. The American manufacturer Spirit, which makes the central section of the fuselage, would be at the origin of these delays. Airbus had to send engineers to this supplier to help solving its problems.


Result: all activity of the FAL focuses, for the time being, around the MSN1.

Based on the article “L'Airbus A350 mal parti pour voler au Bourget” published in Les Echos
Posted by Blogjfa at 8:51 PM