Lighting protection for A350 XWB


Nowadays, lightning strikes are no longer a hazard, but they can cause damage. 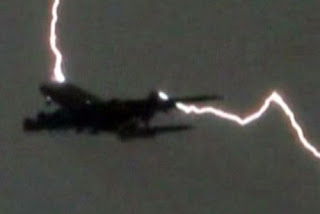 click the image to watch a video
A350 XWB is designed to continue the flight after being hit by lightning and to substitute or repair the damaged area in the next stop. Because it will be hit by lightning once a year.

Lightning strike protection for composite airframes
The conduction and charging processes of CFRP panels are different and more complex than that of single metal panels. CFRP panels consist of several carbon-fibre layers embedded in special resins. A metallic mesh is inserted between the carbon-fibre layers. This is unlike a metal, the structure of which is uniform.
A direct hit from a lightning bolt with that current and voltage could create electrical discharge in composites that generate temperatures high enough to melt resins and weaken structures. The current method for mitigating this problem is to use a metallic layer on the surface of the composite. The composite component of the A350 XWB (as of the A400M) is a copper foil to dissipate electricity. 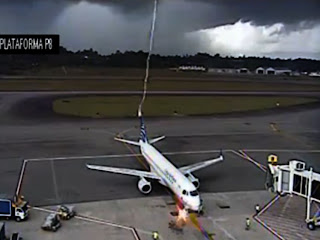 For the A350 XWB Airbus has developed an electrical structure network (ESN) which has been tested and certified in a full-scale environment using a barrel demonstrator. Due to the absence of metal in much of the fuselage it meant that the airframe could not complete electrical circuits in the usual way (as was the case for previous generation aircraft made from metal) and a new approach was needed.
The A350 XWB team devised a system called the ESN that uses the existing metallic structural elements of the fuselage alongside ‘raceways’ and ‘quick junctions’, which together fulfill both structural and safety roles as well as their original electrical function. Raceways are tracks running the length of the aircraft which provide many electrical functions, such as current return and electromagnetic compatibility.
They also offer protection against the effects of lightning strikes and short circuit, and support the electrical harnesses as well as commercial electrical and mechanical equipment such as air ducts. The ESN system is lightweight, and provides a very neat and simple electrical architecture which makes the installation of electrical harnesses and maintenance operations easier. 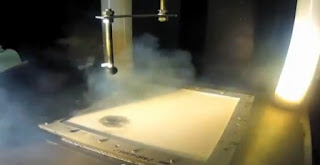