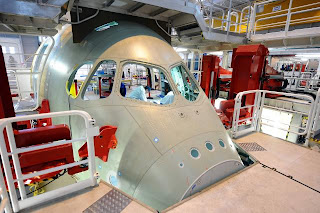 Unlike the cockpit fuselage sections of previous Airbus models, which consist of a single lower shell to approximately floor level, Section 11 forming the upper structure immediately around the flight deck and Section 12 extending aft until just behind the first set of passenger doors, the A350 XWB follows a different construction.


While the majority of the nose fuselage section has a carbon reinforced plastic (CFRP) structure and panelling, Section 11 is made of aluminium. Four composite panels cover the remaining part of the fuselage frame structure: the nose upper shell extending aft from above the cockpit windows; left- and right-hand side panels including the respective passenger door apertures; and a single panel to cover the lower area of sections 11 and 12, which are the largest of the four at approximately 30m². 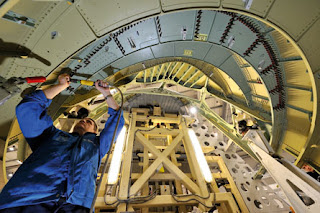 All panels are manufactured in the new composite unit, which is divided into 3 main sections.


Marrying the panels with the externally produced carbon airframe components and locally manufactured metallic Section 11 takes place in the existing assembly facility, in which the nose fuselage sections of other models are taking shape.

Based on the article "Aerolia runs up A350 panel production" published in Flightglobal
Posted by Blogjfa at 4:55 PM