Emergency scape for test-crew located in the main cargo door

For the first aircraft that will start soon the flight tests campaign with the target of EIS in 2014, it has been installed a special emergency evacuation system.

Located in the forward cargo door, it will allow the flight crew to get safely to the ground in case of emergency. Test pilots and engineers will wear lifejackets, helmets and parachutes in some flights with the first “heavy instrumented aircraft” in order to test the extreme performance and all type of limit situations that might occur in the life of the plane.

Why an additional exit for flight tests?
In the FAR 21.35 (d) provision is made for the flight test crew for emergency egress and the use of parachutes. Passenger doors, emergency doors or windows commonly supplied for passenger usage are not meant to be used in motion, nor on situations encountered on envelope opening of the compliance demonstration process. Regarding the above listed requirements FAR asked for additional safety features to be installed on the flight test articles 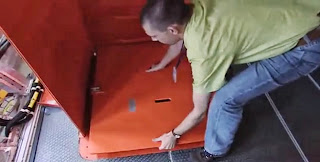 In case something goes terribly wrong and you decide it is time for the test crew to take a silk ride, you need to depressurize the aircraft to get the doors open. No time for that. So the alternative is this emergency exit with a hatch whose cover needed to be blown away  with some sort of pyrotechnic-explosive for the crew to escape.

The emergency evacuation hatch is fired by pyrotechnic candles in the cockpit and in the flight test engineer station. The crew could go to the door and jump into the red tube with their parachutes to leave the aircraft and get safely to the ground. 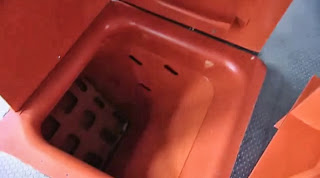 The location of this emergency exit in the main cargo door was the same in the A380 first test-aircraft and makes sense because it is easier to change the cargo door than some fuselage panels if the escape hatch mechanism attached to it.

Other manufacturer like Embraer have similar systems in their bigger aircraft, although this is not the unique configuration available. 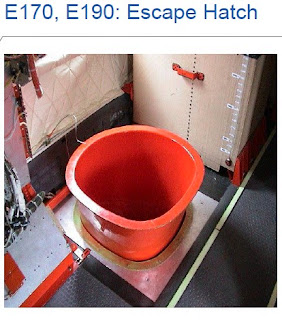