Lightning strike testing has been performed for the A350 XWB in the MSN3, completing a key required step in preparations for the maiden flight.
These so-called “electromagnetic hazard” evaluations – which took place mid-April at Airbus’ Clément Ader facility in Colomiers, France – involved the second A350 XWB flight test aircraft, MSN3, to demonstrate necessary protection levels in case of lightning strikes while aloft. 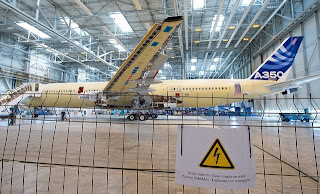 The A350 XWB’s aerostructure is made primarily of composite materials (carbon fibre reinforced plastic), providing more electrical resistance than an aerostructure consisting mostly of metallics.

To ensure the A350 XWB aerostructure safely manages lightning strikes, Airbus developed a solution where metallic foils are embedded in the aircraft’s composite panels – increasing the aerostructure’s electrical conductivity and protecting harnesses with metallic conduits. 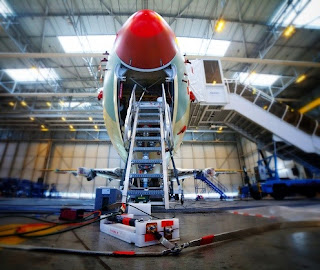 It is important to confirm that such foils provide adequate protection for systems and equipment.

The A350 XWB “electromagnetic hazard” testing on MSN3 lasted around three days, consisting of lightning strike simulations and follow-up measurements of induced voltage/current levels on selected harnesses. These evaluations use a low-level current injection rather than the actual electrical current level generated by a lightning strike, with the measured voltages and current then extrapolated to the real threat of 200,000 amperes.

This testing will be continued by similar but longer tests on the MSN4 aircraft in 2014, fulfilling a requirement for type certification of Airbus’ A350-900 version.

Based on the press release “Confirming A350 XWB safety with lightning strike evaluations”
﻿
Posted by Blogjfa at 12:03 AM