Air France-KLM finally signs the order for 25 A350-900 announced 2 years ago and includes further 25 options after reaching an agreement with Rolls Royce.

Airbus sealed a long-awaited order for 25 A350-900 aircraft from Air France-KLM worth $7.2 billion at list prices after Rolls-Royce and the airline reached a deal over engine maintenance.
The airline also took a further 25 options on the planes, the companies said at the Paris AirShow. 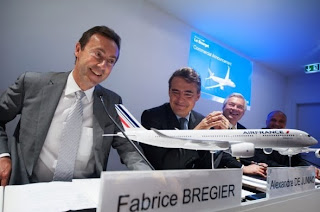 Air France-KLM has been at loggerheads with suppliers over issues mainly including maintenance of the plane's Rolls-Royce engines ever since the deal was first mooted in 2011. Air France and Rolls had clashed over conflicting ideas for engine supply deals.
The airline said in Le Bourget, however, that it had signed a memorandum of understanding with Rolls-Royce to equip the A350s with Trent XWB engines, including their maintenance by Air France Industries KLM Engineering & Maintenance. Rolls said the deal to power the 25 A350s was worth $1.1 billion at list prices. 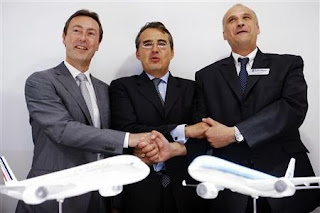 Air France traditionally orders engines from Rolls' U.S. rival General Electric, but the A350 is powered exclusively by Rolls-Royce Trent XWB engines.
Air France-KLM is seeking to lower costs by cutting jobs and restructuring its network as it aims to return to profit and cut debt by 2 billion euros by the end of next year. It faces soaring fuel costs, a worsening cargo business and tough competition from Gulf and low-cost carriers. 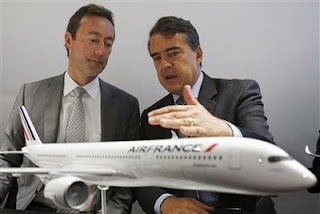 "This shows that despite some difficulties Air France-KLM is facing, we are in sufficiently good shape to be able to plan the renewal of our long-haul fleet," said Alexandre de Juniac, who is due to become Air France-KLM chief executive from July 1.
Air France-KLM currently operates a fleet of just over 190 Airbus aircraft.

Based on the article “Airbus wins A350 order from Air France-KLM” published in Reuters
Posted by Blogjfa at 8:46 PM