Airbus has rolled-out its 3rd A350 XWB flight-test aircraft, MSN2, from the paint shop in Toulouse. As well as featuring a distinctive “Carbon” signature livery to reflect its primary construction from advanced materials, this aircraft is also the first of 2 A350 flight test aircraft to be equipped with a full passenger cabin interior. 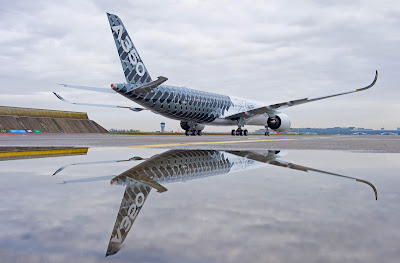 The 5th and last A350 flight-test prototype MSN5 will have the same black&white crosshatch livery and will also be fitted with a cabin layout.

MSN2 will join the A350 XWB flight test fleet in the coming weeks and will be the first A350 to transport passengers when it undertakes the Early Long Flights (ELF) later in the year.

The MSN2 is the first A350 prototype with the cabin fitted and it has been registered as F-WWCF. 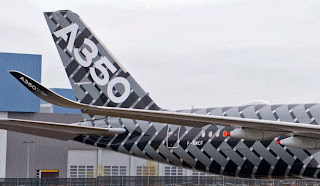 In the upper side of the aft section of the fuselage it can be watched the radome for the satellite based broadband system (a directional antenna is installed in German pre-FAL under the radome). With this system, the passengers will have access to the wifi system within the fuselage for internet connections through smartphones and tablets.

53% of the A350 XWB’s airframe is made-up of carbon-fiber reinforced polymer (CFRP) including Airbus’ first carbon-fiber fuselage.


Based on the press released “A350 MSN2 rolls out of paint hangar with special 'Carbon' livery”
Posted by Blogjfa at 10:50 PM