Enders EADS CEO regarding the A350 XWB first flight: “on track to perform its maiden flight LATER this summer”.

EADS has all but dismissed the possibility of the developmental Airbus A350 twinjet making an appearance at the Paris air show in June and stressed that the type is on track to perform its maiden flight later this summer. 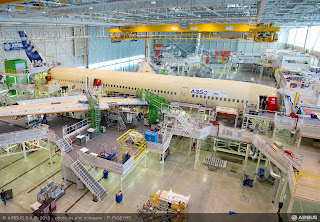 MSN1 two weeks ago when it was in st.30
Airbus had previously said the first flight would simply be in "mid-2013", raising speculation that it could fly ahead of the Paris event.


"Paris is nice," says EADS chief executive Tom Enders, during a New York media briefing. "But it is more important that the aircraft is in its maturity to make its first flight."

Airbus is focused on its rigorous test programme for the A350 and is paying less attention to the "symbolism" of the air show, says Enders. First flight will come in July or August, he adds.

Nonetheless, Enders does not entirely rule out the possibility of the A350 being at Paris: "Miracles happen," he says with a grin.