Engines and APU installed on the MSN001.

Airbus has installed on the first flight-test A350 XWB (MSN001) its two flight-ready Rolls-Royce Trent XWB engines and is also installing the new Honeywell HGT1700 auxiliary power unit (APU) at the FAL.
The new Trent engines were both received from UTC Aerospace Systems (formerly Goodrich) which had recently prepared the fully integrated powerplants prior to their installation on the aircraft’s pylons. 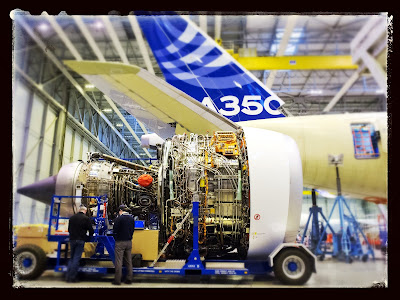 The Trent XWB has already the Type Certification from EASA, and has been flying on the A380 Test Bed since more than a year, demonstrating a high level of maturity.
In parallel to the mounting of the two Trent XWB engines in Toulouse, the A350 XWB is also this week being fitted with its new specially developed APU – the Honeywell HGT1700 which has greater power density and higher efficiency than the previous generation APUs. 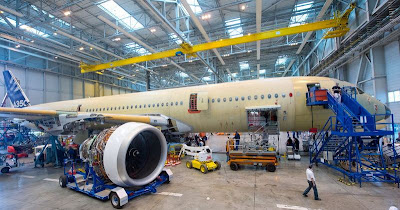 
With the installation of its engines and also the APU, the A350 XWB MSN001 becomes essentially a ‘completed’ aircraft. Following the ongoing ground tests, other preparations and also painting in the coming weeks, MSN001 will then be handed over to the Airbus Flight Test team to start preparations for ground runs and maiden flight in few months.

Based on the article “Airbus installs Rolls-Royce Trent XWB engines and Honeywell APU on A350 XWB MSN001” published in www.airbus.com
Posted by Blogjfa at 3:35 PM