Head-up display HUD. Or how to reduce 15kg improving the safety

Qatar Airways, launch Customer for A350 XWB has included the HUD in the options selected 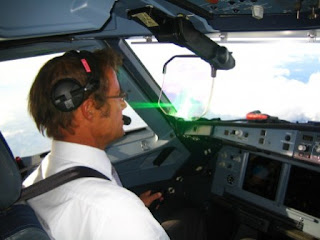 The cockpit design, currently being installed in the FAL, has six displays, with the HUD and the on-board airport navigation system integrated into the display system, which will host the software directly. This has allowed Thales to dispense with a separate processing unit for these systems, with some advantages:

- providing ample room to show all flight and system information needed
- with additional display area available for future requirements
- reducing spares requirements (identical screens are fully interchangeable and have the same part number)
- cutting maintenance costs by up to 80 per cent because of their advanced design and mature technology
- cutting electricity consumption by 150W.
- and the most important, reducing weight by about 15kg 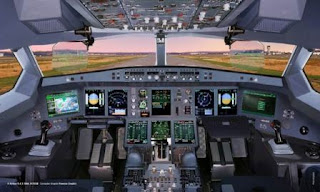 The basic function of the HUD – which is available as an option in dual-configuration onboard the A350 - is to superimpose flight information onto the pilot’s external view, improving situational awareness and overall safety.

A HUD projects an image onto a glass combiner mounted in front of the pilots’ eyes. It displays flight information so pilots can look outside the flight deck, scanning for traffic or flying an approach, and simultaneously view primary flight instruments. The dual HUDs enhance safety in all phases of flight, in both good or poor visibility. HUDs also enable lower visibility takeoff minimums by integrating with the navigation radios and flight management system to provide low visibility takeoff runway centerline guidance. The dual HUDs allow the first officer to be proficient in HUD use when transitioning to captain. 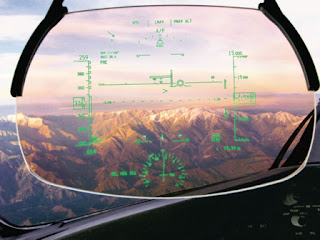 The HUD provides pilots with essential, intuitive and immediate trajectory information through symbols presented on top of the pilot’s actual external view. It allows smoother transition as pilots switch between “eyes in” and “eyes out” operation. The HUD system also has the possibility to bring some operational benefits such as reduced minima on suitably equipped runways.

HUD is available for the A380 from Air France, Korean Air, Qatar Airways and China Southern Airlines. And the 787 also includes the HUD, promoting “eyes out of the flight deck” flying for both pilots. 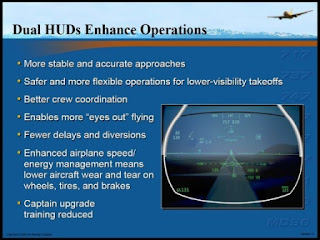