Spain has reduced its stake in EADS to 4.2% from 5.41%, as part of a deal with France and Germany to simplify the ownership structure of Europe's largest aerospace group.
EADS, in which France, Germany and Spain hold stakes, is in the midst of a transformation to a diversified group subject to less state intervention, and aims to have 72% of its capital floating freely on stock markets by next year, compared with less than 50% in December/2012. 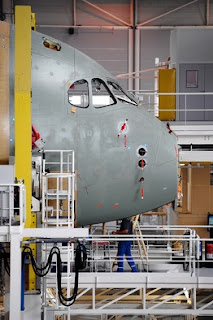 The company's shareholders approved sweeping reforms on 27/March that weaken the influence of European governments and allow the aerospace giant to pursue its global ambitions unfettered.
They notably dissolved a complicated shareholders pact that gave EADS's 3 founding states -France, Germany and Spain- veto rights on strategic decisions and rights to nominate board members.

The European workshare in the A350 XWB program can be watched in this picture; 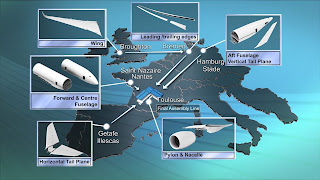 Until the A350 XWB program, France and Germany had allocated 37,5% each of Airbus projects in a system once dictated by ownership levels when Airbus started as a consortium 40 years ago.

Allocating Airbus workshare is a country to country competition, not a free market.  With the new shareholder distribution in EADS, European governments´ influence will be lower for next programs. 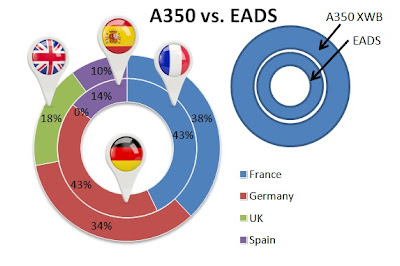 EADS was created in 2000 from a merger of DaimlerChrysler Aerospace AG in Germany, Aérospatiale Matra in France, and CASA in Spain. The Group is the best practical example of a truly successful European company today and it includes:
Airbus; manufacturer of commercial & military aircraft, with Airbus Military for tanker, transport and mission aircraft
Astrium; space programmes and systems
Cassidian; solutions for armed forces and civil security
Eurocopter; civil and military helicopters.

EADS is also the major partner in the Eurofighter consortium and a stakeholder in the missile systems provider MBDA. 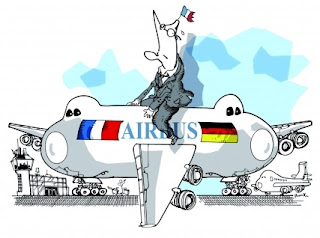 Based on the article “Spain reduces stake in EADS to 4.2%” published in Agence France-Presse