Concerning the batteries, “A350 XWB is on the safe side” while the 787 remains grounded. The A350 XWB will be certified with a nickel-cadmium battery rather than try a lithium-ion battery like 787s.

As the A350 XWB gets certified, Airbus decided in February to stick with a nickel-cadmium battery rather than try a lithium-ion battery like the ones that have left the 787 Dreamliner grounded since mid-January.
Airbus CEO Mr. Bregier said lithium-ion batteries are still attractive for aviation because they weigh less for the same power, but that putting them on Airbus planes may come two years or more down the road. He said that there are too many uncertainties surrounding the new batteries. 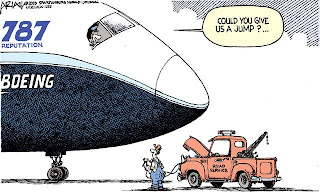 "I'm on the safe side. I'm not saying Boeing is not on the safe side – this is not up to me. This is (up) to FAA and other agencies," Bregier said.
The Federal Aviation Administration grounded the Dreamliner on 16/January/2013, after an All Nippon Airways flight made an emergency landing in Japan with a smoldering battery. The incident came after a 7/January battery fire in a Japan Airlines plane parked in Boston. 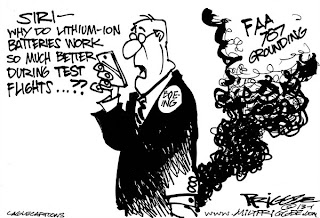 Boeing redesigned the battery, with greater insulation between the cells, a fireproof steel shell and a titanium tube to carry electrolytes and smoke off a plane if there were a fire. The FAA is evaluating whether to certify the new design, after Boeing completed a certification flight last week.
"It's not to make Boeing's life more difficult," Bregier said of the battery decision. "Their life is difficult enough right now."

Based on the article “Airbus CEO touts A350, tweaks Boeing” published in USA Today.