Airbus considers offering dimmable windows for A350 but only when the technology is mature to block out 100% of the light.

After 787 Li-ion batteries issue, Airbus has adopted a “minimum-change approach”. So they may eventually offer electrochromic dimable windows on it’s the A350 but only when the technology is "sufficiently mature" to block out 100% of the light entering the cabin. 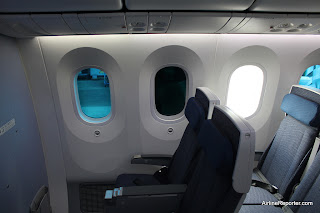 Zuzana Hrnkova, head of interiors marketing at Airbus, admited it had trialled the technology with airline customers but found there was "no market" for the windows at present.
Boeing has introduced the electrochromic glass, supplied by Gentex, on its new 787 but airlines have complained the technology does not allow the glass to become dark enough, with some Japanese carriers even issuing passengers with stick-on window blinds.

Hrnkova says Airbus worked with Gentex to produce a cabin mock-up to test with its customers. "They told us that it did not provide 100% darkness. Even if it achieves 99% darkness there is still a lot of light penetrating the cabin and that is a no-go for them, especially on long-haul flights," she says.
Although window blinds will be standard on the A350, Airbus has retained the space to integrate the electrochromic windows at a later date, says Hrnkova, once the technology has matured. 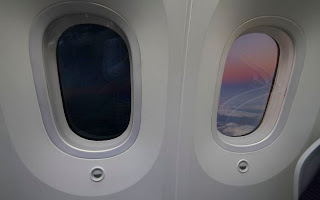 Based on the article “Airbus may offer dimmable windows on later A350s” published in Flight Daily News.
Posted by Blogjfa at 8:59 PM