Systems pre-installed in support/floor grids to reduce assy lead time in the FAL.

Airbus and Boeing have adopted similar methods of pre-equipping large modules in the 787 and the A350 to reduce lead time and recurring costs. 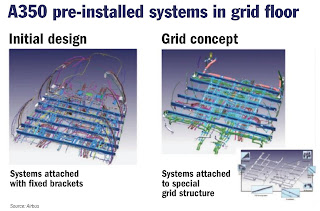 An example of this is the decision to pre-install systems such as electrical harnesses and other cables and piping above the avionics bay using a secondary support grid structure, rather than attaching them to crossbeams with fixed brackets in the traditional manner. 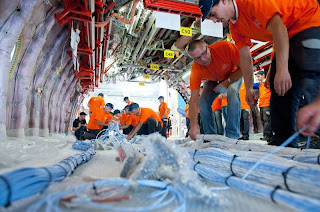 “Lead time has been reduced by 80% on the floor grid in the nose above the avionics bay. Before, it was impossible to produce as a module so we started to go into the architecture. As a result, we developed a secondary structure we can pre-equip,” says Gralfs, Airbus VP of overall physical design, who adds that the integration of the unit lies on the critical path. 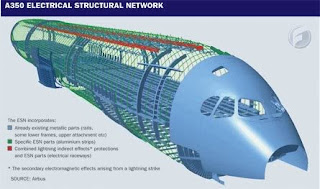 All of the A350’s metal parts — including aluminum seat rails and a mix of aluminum, aluminum/lithium alloy and titanium for lower frames and passenger cabin structural floor grid beams — do double duty. Each part has a structural function, and it also forms part of the overall electrical structure network (ESN) within the aircraft.

Based on the article "Airbus’s Automated Future Features Robotics" published in Aviation Week
Posted by Blogjfa at 4:38 PM