The final assembly in the FAL of the MSN002, the 3rd A350 cabin flight-test prototype, will start next week.

The Final Assembly starts with the arrival of the 21m. section 11/14 by a Beluga from the Airbus' Saint Nazaire plant. This forward fuselage section is assembled at St-Nazaire plant, by joining-up two pre-equipped fuselage sub-sections: section 11/12 the French nose fuselage built by Aerolia (France) and assembled and equipped with its systems by Airbus in St-Nazaire. And the section 13/14 German forward fuselage, built by Premium Aerotec (Germany) and equipped by Airbus in Hamburg (Germany). The post join-up system installation is done at St-Nazaire. 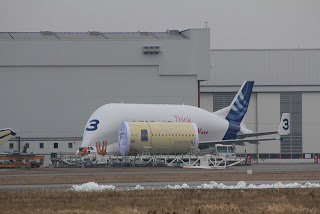 The forward section will be mated with the centre (section 15/21) and aft fuselage (section 16/18) in June.


The Horizontal Stabilizer, already finished in Spain, is being shipped to the FAL as well as the Vertical Stabilizer (from Germany) that is at Toulouse since some weeks ago. 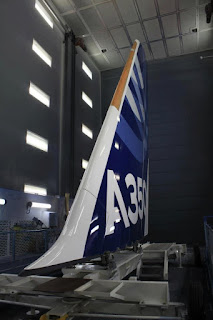 The MSN002 is the third A350 to fly and will have a cabin installed. The operational testing on the cabin will be the focus on this aircraft.
But the maturity level of the cabin is high due to the MSN5011 “Cabin zero” in Hamburg where all cabin-related system functions have been tested on 15 benches plus a physical mockup.  Airbus built this 'physical mock-up' of A350 XWB fuselage to avoid A380 mistakes. "The cabin can be linked to functional system integration benches, such as the air system - to look at air distribution - or the IFE system." 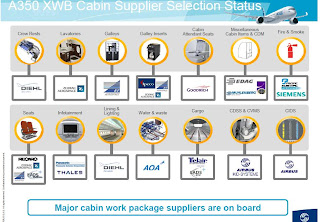 In parallel in Toulouse, the “aircraft zero” has been used to test all flight systems since months ago.

Airbus believes that doing this could save between 25%-30% of the flight test time. "The DMU is a fantastic tool, but the lesson learned from the A380 was that we needed to go further to anticipate system installation problems," says A350 program manager Didier Evrard. "This was a large burden we carried on the A380 program and this is why we've built this physical mock-up." 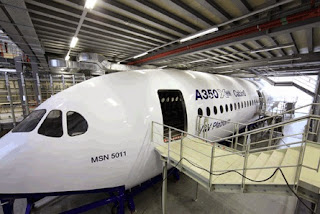 Cabin zero is fully furnished with seats, lining and monuments in a layout based on the arrangement of the A350 cabin flight-test aircraft MSN002.


Another lesson learnt from A380 has been applied in Airbus, which has taken a conservative approach in developing the A350 to avoid the pitfalls of previous projects.
Buyers have been given a strict list of cabin options, after unlimited choice on the A380 led to complex wiring that caused delays.
Posted by Blogjfa at 9:36 AM