The first steps, already completed, were to turn on the Auxiliary Power Unit (APU) and check circuits & aircraft systems, one by one (including the air-conditioning system) under APU power. 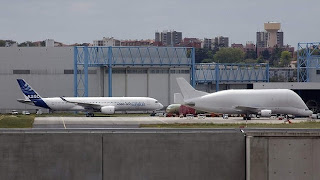 The second step, already done was to start the R-R Trent XWB engines one after the other, again briefly at first, to detect any oil or fuel leaks.

During following days, hydraulics and other systems will be run with the engines on. The "bleed air" will be test. This is a traditional conduit of air from the engines used for cabin pressurization and de-icing. 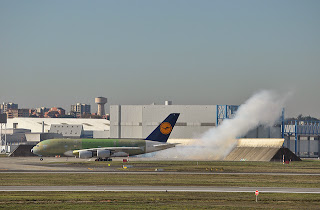 Lufthansa´s A380 in the engine test cell

After that, test-engineers will progressively squeeze power out of the engines with brakes on. This is done in a "run-up" area, like a concrete paddock, called “BIKINI” engine test cell at Airbus Saint-Martin site in Toulouse.

In parallel, the aircraft has started to move under its own power, slowly at first, and then up to 60 knots (111 km/h). 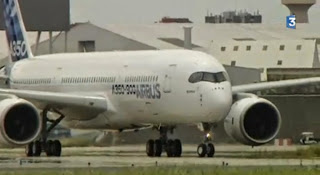 Click the picture to see the video of slow-speed taxi

The plane's pre-flight workout end when the six pilots and flight engineers on orange jumpsuits, parachutes and life-vests for a rehearsal, pushing the plane close to its take-off speed. After that last test, ground mechanics will carry out a thorough two-day inspection.

Based on the article “Factbox: Countdown to A350 first flight” published in Reuters