White smoke on the MSN001 engines power up for the first time; "Habemus aeroplanum".

Rolls-Royce’s Trent XWB engines have run for the first time on the A350 XWB (MSN001) following the start-up of the Auxiliary Power Unit (APU), as part of the preparations for the aircraft’s maiden flight. 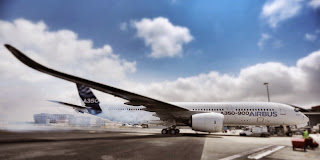 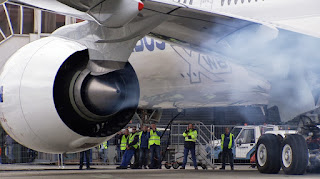 The Auxiliary Power Unit (APU) (the small turbine engine under the tail) is used for power on the ground. The start-up test of last week consisted on checking if the APU leaked of oil or fuel, and after that, run the air-conditioning and other aircraft systems and circuits.

Rolls-Royce has planned to make 16 flight-compliance engines for the flight test campaign; 10 will be dedicated to A350 flight-testing. One (called Engine 21001) is a “training” engine used to prove tooling and train the assy-fitters, 3 will be spares, and a further 2 will be built for contingencies.

Trent XWB engine is the largest yet produced by Rolls-Royce, with a 3m fan diameter and blades 76mm longer than in the A380's Trent 900. It was certified by EASA (European regulators) in February/2013 and it is the result of the work of a big team involving 75 suppliers worldwide, 16 Rolls-Royce plants, 12 partners and 25 dual sources. A team currently working in the engine for the A350-1000.

Based on the press release “First A350 XWB’s engines powered up” by Airbus.