The MSN18 has been delivered to Finnair. 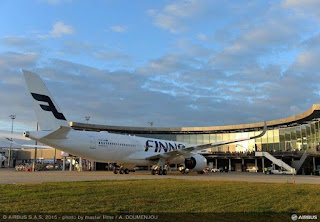 
This is the 7th aircraft delivered to Customers: Qatar Airways (4), Vietnam Airlines (2) and now Finnair (1). 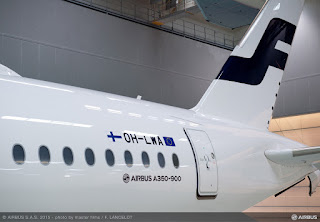 
The A350 XWB European launch customer has 19 of the type on firm order, to be received from 2015-2023, and has become the 3rd carrier after Qatar Airways and Vietnam Airlines to operate the A350 XWB. 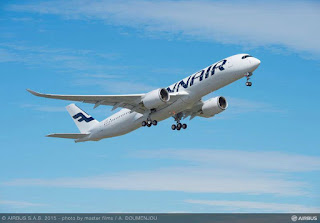 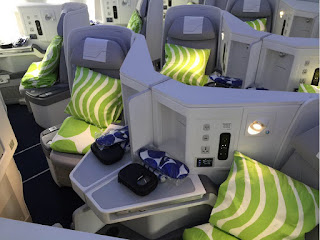 Finnair will commence commercial services with the A350 XWB inmediately, with a European tour starting at Amsterdam and Oslo on 9/October.

Furthermore, on the 21/November, non-stop long-haul A350 XWB flights will start from Helsinki to Shanghai. 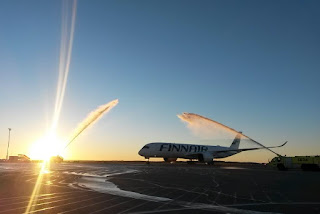 The aircraft will join the airline’s all-Airbus fleet of 45 aircraft in operation, today comprising 30 A320 Family aircraft and 15 A330/A340s. 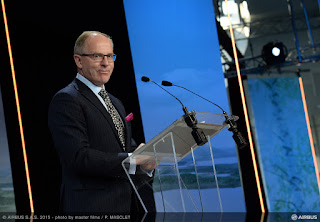 Source: Airbus
"Finnair has enjoyed a long and prosperous working relationship with Airbus and the A350 takes our cooperation to another level.“

“This aircraft is the future of flying and will give our passengers a completely new and enhanced travel experience," said Finnair CEO, Pekka Vauramo. 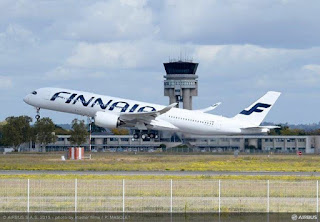 
Working closely with Airbus, Finnair had been preparing the handover for 10 years.

“Today heralds an exciting chapter in our history,” CEO Pekka Vauramo said. “The A350 XWB is the future of flying. This is the moment we have been waiting for.” 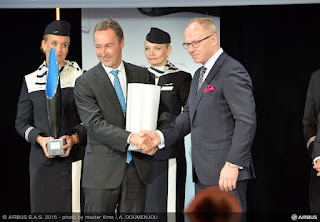 "At Airbus, we're proud and delighted to see Finnair, one of the world’s longest-standing and most respected airlines, become the first European carrier to fly the A350 XWB,”  said Fabrice Brégier, Airbus President and CEO.

“The A350 XWB's unrivalled fuel efficiency and passenger comfort make it the perfect aircraft to spearhead Finnair's Asian expansion.‎"

“Ties between our 2 companies are becoming even stronger,” commented Fabrice Brégier. “I must thank Finnair for giving the A350 XWB such firm support.” 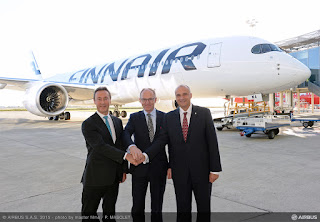 Eric Schulz, President - Civil Large Engines, Rolls-Royce, said: “We are very proud to be with Finnair and Airbus today to mark another chapter in the A350 XWB story.”

“The Trent XWB exemplifies how we take the best in technology to deliver new standards of excellence. Today marks the start of a new era in our relationship with Finnair and we look forward to working with them for many years to come.” 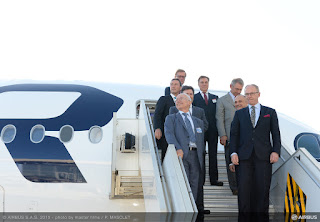 The aircraft will form the backbone of Finnair’s long-haul fleet at a time of strategic importance for the airline. It has ambitious plans to double passenger numbers to Asia by 2020, making Helsinki Europe’s gateway to the Far East. 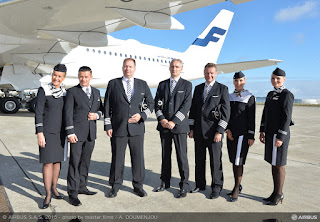 “This is the beginning of a new era for Finnair,” said Maija Ignatius, Finnair’s A350 XWB Chief Purser.

“Everything is new and rethought for modern flying. I believe passengers can sense the excitement and pride as we work in the new airplane.

“I’m honoured to call the A350 XWB my work place. The experience of flying will be redefined!” 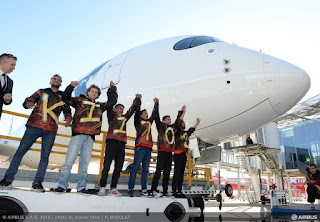 Based on the press release “Kiitos! Airbus says thank you to Finnair”