In the analysis done by Aviation Week for the 2013 outlook, and when referring to A350 XWB, it is said that the two key issues at Boeing and Airbus in 2013 will be the supply chain and the engineering capacity.


What will make 2013 particularly challenging for Airbus and Boeing is that the wave of development activity coincides with production levels rising to historic highs. Both manufacturers are keenly aware of the potential for disaster if their planned ramp-up and development schedules are impacted by supply-chain issues or engineering capacity shortfalls.


As Airbus starts flight testing and initial production of the A350, it also has to ensure that the transition from the current A320 family to the A320NEO goes smoothly, while managing an increasingly strained supply chain and weathering economic uncertainty. 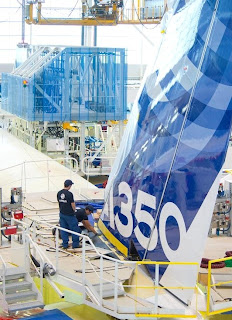 
Airbus is currently assembling the 3rd A350 and plans to slowly ramp up production. The first aircraft is to make its maiden flight this summer; an exact date has not been announced but rollout is tentatively planned for April. If everything goes to plan, the first A350-900 will be delivered in the second half of 2014, following certification.


For the A350, 2013 will also be a crucial year for suppliers. Airbus has so far managed to limit delays to a few months, despite early production problems particularly in wing assembly. But some high-risk work has yet to be finished. Scrambling to stay on schedule, Airbus introduced weight-saving design changes to the A350 in batches. The changes lead to extra design and manufacturing work for suppliers, and sources in the supply chain have warned they could face bottlenecks. 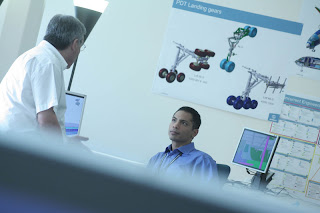 
As Airbus wrestles with getting the -900 certified and into service next year, work on the revised A350-1000 is intensifying. Deliveries were planned for 2015, but Airbus extended the schedule by two years to allow time for development of higher-thrust Rolls-Royce Trent XWB engines that key customers like Emirates and Qatar Airways have requested. Some customers are still not entirely happy, and debate centers on how much range future long-haul aircraft should offer. Persian Gulf area carriers need extreme ranges to serve destinations such as the U.S. West Coast. With orders for only 88 aircraft by mid-November, the -1000 is still a slow-seller. 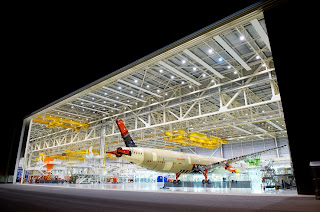 
At the same time, Airbus is faced with a decision on whether—and when—the smallest version of the A350 family, the -800, needs to be built. The aircraft is seen as the least attractive variant. Airbus has 118 firm orders for the -800, but some customers have recently opted to move to the larger -900. That trend coincides with Airbus's interests, as it could take pressure off the development schedule, allowing the manufacturer to focus on the -900 and -1000.

Based on the article “Moving Picture" published in the special issue of Aviation Week of January/2013
Posted by Blogjfa at 11:10 PM