Turkish ailerons for the A350 XWB


Turkish Aerospace Industries, Inc. (TAI) is the center of technology in design, development, manufacturing, integration of aerospace systems, modernization and after sales support in Turkey. Located in Ankara, Turkey, TAI's modern aircraft facilities are furnished with high technology machinery and equipment that provide extensive manufacturing capabilities. TAI has a total of 4.000 highly motivated employees, 1.500 of whom are engineers. 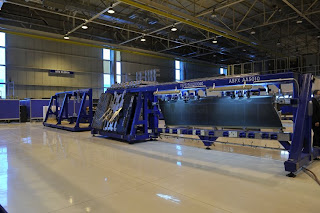 For the Ailerons of the A350 XWB, TAI has a Design&Build contract with Airbus.


The first Turkish design ailerons produced by Turkish Aerospace Industries (TAI) have already been installed in the MSN001 at Toulouse Final Assembly Line.
“Ailerons are vital components of an aircraft and TAI will continue to try to win other business packages with Airbus”, TUSAŞ Chairman Yalçın Kaya said, adding that it is an important step for TAI, which aims to become one of the world’s largest aviation design centers, to be able to design and manufacture them. 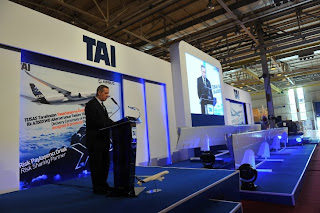 TAI has become a major contractor, winning the confidence of international aeronautics firms, said Murad Bayar, Turkey’s Defense Industries Undersecretary, in his speech at the event of the first set delivery.

“God willing, we will see our own planes manufactured by TAI. We expect to hit our targets this year,” Bayar said.