Airbus closely monitoring 787 major battery malfunctions to mitigate the risk of grounding the A350 XWB fleet in the future.

Airbus has set a taskforce to monitor all data, information and safety improvements related to the in-flight fire in hazardous Li-ion batteries that has spoiled and forced the 8 airlines -that has received 50 aircraft- and regulatory agencies –with American FAA leading them- to ground the complete 787 fleet. 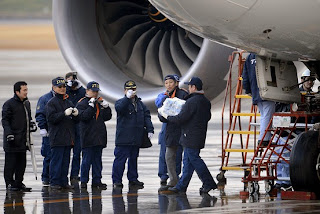 Because it is not only an issue with the electrical systems but a series of incidents, as the 787 grounding is the first one for many years (the last time the FAA issued this type of order grounding a jetliner model occurred after a DC-10 lost an engine and crashed in 1979). The FAA called for Boeing and its airline customers "to develop a corrective action plan" and Boeing is working around the clock to resume the flights as quickly as possible. 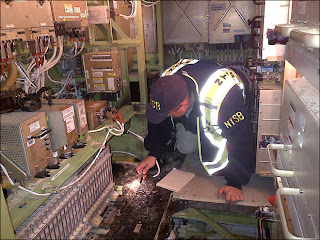 Boeing confirmed that a fire on two JAL & ANA 787s appeared to have started in a battery, and the National Transportation Safety Board said the battery had "severe fire damage." The fire happened on the ground 7/January, with no passengers on board JAL 787. Only a week later another 787, this time from ANA, made an emergency landing in southern Japan after battery alarm and smoke. The key is that in-flight fires can be catastrophic, so the matter is getting close scrutiny by aviation authorities. 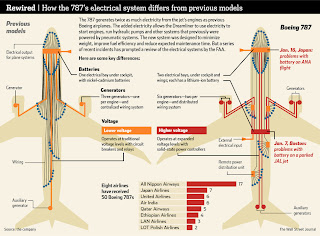 A350 XWB has also lithium-ion batteries, which is considered hazardous in many applications and in air cargo shipping. While the 787′s use of Li-ion is attracting headlines, the use in airplane applications is more common than has been recognized.


The Airbus A380 uses lithium batteries to power its emergency lighting system. The US FAA set special conditions when certifying the aircraft. Airbus says “the batteries are small, limited, and are not in a frequently-active charging/discharging function.” And the Airbus A350 will have Lit-ion batteries as can be read in the website:
“Airbus also has looked at new ways to generate electricity aboard the aircraft itself. The A350 XWB features a new lithium-ion battery that marks a significant improvement on the Cd-Ni unit used in other models. The battery contains less hazardous material, which makes it safer to handle. Adding to the benefits, it has a higher power and energy density, and low maintenance requirements, all while lasting up to three times longer than the Cd-Ni.”


So the reason for equipping the 787 and the A350 XWB with batteries is the same: improve fuel efficiency, reduce maintenance costs/time and reduce weight. 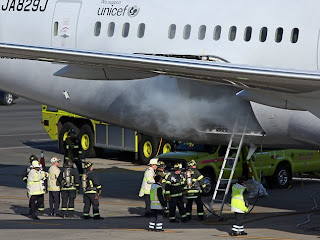 The batteries are used for the following functions: 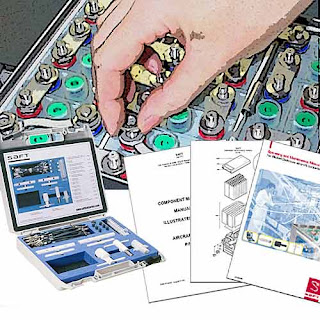 The A350 XWB has 4 identical part number 28V Lithium-Ion batteries from Saft,  meaning there are 28 Li-ion cells on-board (compared with only 14 on the 787). Airbus electrical systems engineers have studied the known failure mode for Li-ion batteries called thermal runaway.


Only 2 of the 4 batteries are connected to the buses in a way such that they can supply standby DC power in an emergency. The battery system offers a truly innovative solution and includes an integrated monitoring and charging system using proprietary Saft know-how in the relevant electrochemistry algorithms.


Currently, and this could be modified, the electronics bay –where relatively few flammables are installed- doesn’t have a fire suppression system. 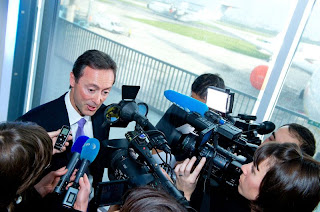 Airbus CEO Brégier: “We went through discussions with the regulatory agencies – EASA [European Aviation Safety Agency] and FAA [Federal Aviation Administration] – and they seemed happy with the [A350 electrical] architecture,” he said. “Regarding the A350, we’re in the development phase. We will have many opportunities to change things. With regard to the electric architecture, we see, unless we receive new information, no need to change the architecture.” “Both Boeing and Airbus give the same priority to safety,” affirmed Brégier.

The announcement “There is no Boeing 787 flying anywhere in the world at the moment"  shocked the aerospace industry and it is not good for the A350 XWB because the public confidence in the fleet of 787 or any aircraft needs to be restored and it will take time.

Based on the article “All Boeing Dreamliners Are Grounded World-Wide” published in The Wall Street Journal
Posted by Blogjfa at 10:23 PM