Batteries incident in 787 could impact the A350 XWB first flight targeted for Le Bourget in mid-June/2013. Safety is the first

Airbus knows that what happens to Boeing could in similar form happen to Airbus so nobody at Airbus is anything but empathetic. CEO Fabrice Breigier expressed sincere hope for Boeing’s plight and efforts to return the 787 to service, and this reflected universal sentiment.


Regarding the use of lithium batteries on the A350 XWB, Airbus officials, without any hint of criticism over Boeing’s choice of an all-electric airplane, simply explained the differing philosophies that led to Airbus’ conclusion to retain more tradition methods of powering the A350: hydraulics and pneumatics. The benefits of all-electric didn’t offset the risks and costs enough to go this route, officials said. The result is that the A350 XWB actually draws less power from batteries than the A330 because of design efficiencies, they said. Further, the Auxiliary Power Unit on the A350 XWB is started by two batteries splitting the load versus one battery on the 787 carrying all the load. That leads to less power per battery being required in A350. “But that does not mean that we may not be facing the same issues as Boeing,” said Tom Williams EVP-Programs. 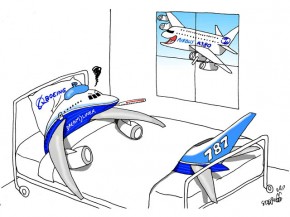 Airbus CEO Fabrice Bregier tried to calm everyone and said there is not foresee an imminent effect of the Boeing 787 grounding on the Airbus A350 XWB program. “Airbus went through discussions with the FAA and the European Aviation Safety Agency about the electric architecture of the aircraft and they seemed very happy at the time.”


Airbus will “carefully study” recommendations that come out of the Boeing 787 investigation and evaluate whether they apply to the A350, with Bregier noting that the A350 still is in the development stage, so modifications are still possible. 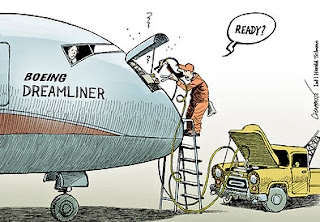 However, Executive VP-Programs Tom Williams concedes that replacing the lithium-ion batteries would be a “very serious decision” and possibly cause “months in delays” in the A350 program, impacting the first flight.


The real impact on Airbus is still uncertain. While Airbus has selected a different supplier, Saft, for the batteries, the A350 XWB also is a less electric aircraft than the 787. Systems such as braking and functions such as de-icing are still performed in the conventional way, using hydraulics and bleed air, respectively. 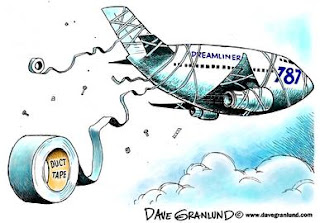 According to Williams, Airbus has design features intended to make the battery operation particularly safe, including mechanical relief vents made of titanium. “The critical issue is to get failure management right,” he says.