Is the A350 XWB cabin interior designed for women or for men?

Men and women have different habits in airplanes.

The airlines indicate that, in general, women prefer seats next to the window. Among frequent travelers of US Airways that have declared their preference in this regard, men prefer the aisle in an almost 2-to-1 ratio, advises the airline.
Meanwhile, aisle-seats are preferred by men. But while he wants the shade up, she likes the window seat with the shade pulled down. 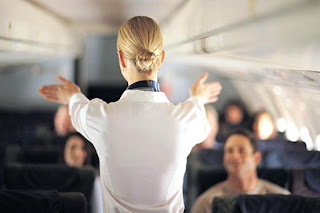 More gender differences in flying; women usually carry a bag while men a small suitcase. Women huddle in the seat and avoid contact, while men extend elbows and legs and sometimes invade the space of their neighbors.

Women and men have different habits when it comes to getting on a plane. It is an area that is capturing the attention of airlines at a time in which more women thicken rows of frequent travelers.
Several airlines, as Delta Air Lines and US Airways say that between 54% and 56% of its clients are male. However, the difference is stabilizing. Virgin America points out that in recent years, 52% of its passengers have been male and 48% female.
British Airways transports more women than men, according to a spokesman. In the case of American Airlines, the men represent 55% of the members of its frequent flier program, but under 30 years old, women now outnumber men in that same age. 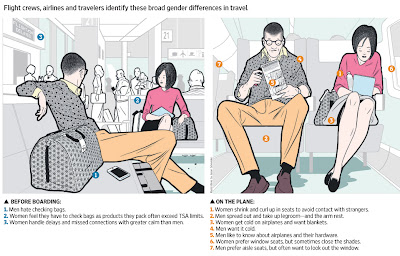 When talking about entertainment, there are also differences; airlines with systems of entertainment, such as Virgin America, indicate that women prefer to watch movies and men are more likely to tune in live news and sports programs.
A study on the meal preferences of travelers, Delta found that women are more inclined to salads and tapas (small dishes).The airline now evaluates changes in the menu. 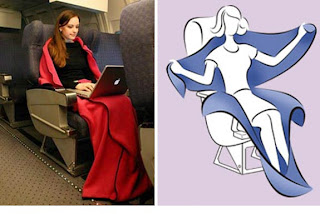 Blankets tend to be more used by women than by men, also say the airlines.

Men remember what type of plane they’re flying on at first sight, while women couldn’t care less.
Generalization into which you can fit or not. But airlines should take into account. As hotels are doing, for instance, knowing that women prefer to read the ebook/ipad on bed while men seated (in a chair or in the bathroom).

Based on article “He Carries On, She Likes to Check” published in The Wall Street Journal.