Airbus not considering the A350-1100 possibility

Airbus appears to be dismissing the possibility of a further stretch to the A350, despite the capacity gap between the A350-1000 and the A380 (as shown in this Boeing´s chart). 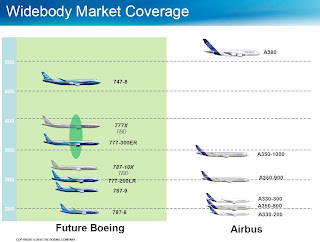 
While Airbus positioned the A350-900 as the central platform for the 3-member family, the backlog of the smaller A350-800 is eroding in favour of the larger variants.


Airbus does not see room for a further stretch beyond the A350-1000; "A double stretch has never been shown to work in this industry," claimed Airbus chief operating officer for customers John Leahy, speaking in Toulouse on 16 January. "We couldn't do it. And we don't think [Boeing] could do it either."


The A350-1000 underwent a redesign in 2009 to improve its thrust and range capabilities but Airbus resisted stretching the fuselage. The -1000 has yet to achieve convincing sales - a matter Leahy attributes to slot availability - but the aircraft has attracted orders from Cathay Pacific and Qatar Airways. 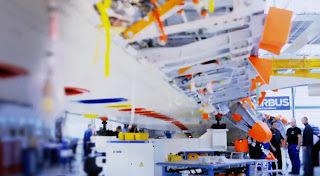 We should wait until Le Bourget Air Show to watch the next movement; A350-800 could be cancelled, could be postponed or could be maintained. And it will be directly linked to the future decision in the higher range of the family, with 787-10X and 777X by Boeing and above commented possible A350-1100 version.


Based on the article “Airbus unconvinced over further A350 stretch” published in FlightGlobal
Posted by Blogjfa at 9:51 PM