The A350-1000 development goes ahead and meanwhile Boeing has not decided to launch neither the 787-10 nor the 777-X. Some American analysts worrie about that considering Boeing is wasting the time that will require in the future to response to the A350 XWB. Other analysts think that Boeing is just being very careful. 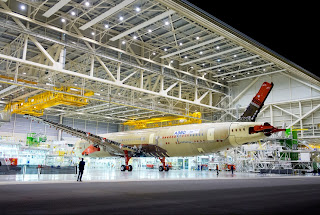 The largest variant of the family, the A350-1000, to come out in 2017 after two smaller A350 models, is designed to fly the same missions as today's 777 while burning 25 percent less fuel.
Airbus sales chief John Leahy said that launching the A350-1000 earlier — ahead of the smaller and so far unpopular A350-800 — is "definitely a possible alternative." Airbus' Leahy says Boeing won't be able to match his A350-1000 until around 2022. "It'll take them that long to come up with technology that'll be competitive," he said.
The timing of Boeing's response to the A350 threat remains opaque.
In early 2012, Jim Albaugh, Boeing's commercial-airplanes chief at the time, said he hoped to ask the Boeing board by the end of the year for authority to sell both a bigger Dreamliner, the 787-10, and an enhanced 777 with new engines and a composite plastic wing, the 777X.
With zero fanfare, the board granted authority to offer the 787-10, though it gave no subsequent sign of when it might formally launch the program. Meanwhile, the 777X program went completely quiet. 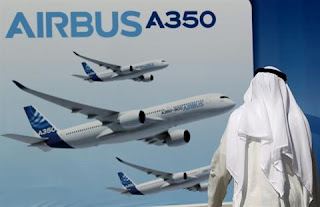 The expectation now is that Boeing may delay the launch of the 787-10 until the Paris Air Show in June, with the 777X coming even later.
What's going on?
Aviation analyst Richard Aboulafia of the Teal Group worries that Boeing corporate in Chicago is turning its focus — as it did in the early 2000s — to rewarding investors through share buybacks and dividend payments, instead of investing its cash in new jet programs.
"I'd be scared of a return to the bad old days," said Aboulafia. "If there's anybody helping the A350 now, it's Boeing."

But Adam Pilarski, aviation analyst with consulting firm Avitas, said Boeing's slowdown of the 777X is simply prudent, because Airbus' A350 concept may yet shift.
Though Leahy denies it, many believe the A350-800 could eventually be canceled; meanwhile, the larger A350-1000 design may have to be fine-tuned.
"Why play your cards too early?" Pilarski said about Boeing.
Boeing's Tinseth said that despite any slippage in launch announcements, and contrary to Leahy's opinion, the company's two pending jets will still reach the market on schedule. "We're still focused on both the 787-10 and 777X to enter service late this decade," said Tinseth.

Because the 777 is built in Everett, the 777X jet will certainly be assembled there. The big question is whether its new carbon composite wing will also be built locally. It's unclear if we'll get the answer to that in 2013.
Then in summer, Boeing should fly the 787-9 for the first time. And by June's Paris Air Show, the company should finally provide clarity on its plans for the 787-10.
As for the 777X, Steven Udvar-Hazy, chief executive of Air Lease Corp. and long respected as a judge of the airplane market, said Boeing is just "being very careful, thoughtful and methodical .Behind the scenes," Udvar-Hazy insists, "there is tangible progress."


Based on article “Boeing reclaims No. 1 role with 2012 successes” published in The Seattle Times