One of the first test already done in the A350 MSN1 test-flights has been the RAT emergency power system.

The Ram Air Turbine emergency power system, known as RAT, is one of the backup power sources that are designed to automatically engage and ensure that those systems needed for continued safe operation of the airplane are powered, in case a failure of the power from both engines.

Theoretically, there is no time limitation for flying with the RAT. The Emergency Generator should remain supplying until touchdown; so the aircraft should never become 'Batteries Only'.
In the extremely rare loss of power from the engines, the RAT deploys into the airstream and produces power for the cockpit and flight controls to safely land the aircraft. 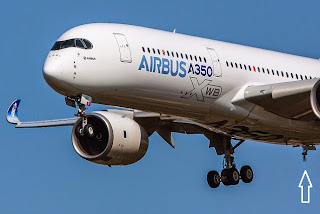 In the A350 XWB, the place of stowage is under the fuselage fairing (belly fairing).

A ram air turbine (RAT) is a self contained turbine unit with a hydraulic pump attached that is deployed automatically when main system pressure drops below a predetermined value.

The RAT must be capable of operation over a broad speed range, maintaining normal hydraulic pressure, whether the aeroplane is at maximum speed and height or slowing for landing. 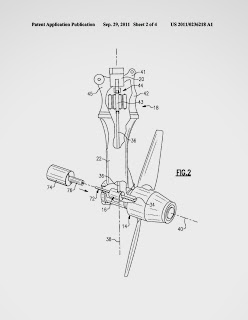 This system was tested in January/2013 in the A340-300 MSN1 –ahead of the first flight- in order to identify any issue jointly with the risk sharing partner that has “design & build” it; Hamilton Sundstrand Electric Systems (a subsidiary of UTC) located at Rockford Illinois (USA).
Posted by Blogjfa at 10:31 PM