Qatar Airways CEO Akbar Al Baker has hinted he may be poised to make an order announcement in Dubai, with the Boeing 777X and Bombardier CSeries on his wish list. Speaking during a media roundtable at the Paris Air Show, where Qatar ordered nine Boeing 777-300ERs, Al Baker said there “may be” an order in the pipeline for the Dubai Air Show in November. Rapidly growing Qatar, which took delivery of its sixth 787 on the eve of the Paris Air Show, is now receiving an average of one new aircraft every 12 days. This is down from an 18-day average interval 2011 and 15 days in 2012. The Doha-based carrier now operates 125 aircraft to 128 destinations.

A Qatar spokesman said that 787 arrivals in 2013 have been “squeezed” because of the FAA grounding due to issues with lithium ion batteries that have now been resolved, but Qatar is still due to receive 4 more of the type this year. Qatar has taken 6 of the 30 787s it has on firm order. It also holds 30 787 options. “Qatar is not in the business of canceling options,” the spokesman said. 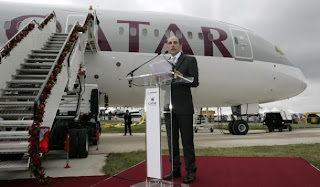 Qatar Airways CEO Akbar Al Baker may not order new jets on quite the grand scale of Tim Clark, the president and CEO of Emirates, but is if anything even more direct when it comes to kicking the tyres of potential acquisitions, and the ankles, if not other parts, of their makers.
His unfavourable comments about the 787-10 in this recent interview in ATW are a good example of his tell-it-like-I-see-it style.

Based on the article “Qatar CEO critiques 787-10 unfavourably, but he does that to everyone” published in Plane Talking.