Boeing may be breathing a sigh of relief that a fire onboard an empty Ethiopian Airlines 787 Dreamliner in London had nothing to do with the jet's lithium ion batteries, but now it faces a new challenge.

The Dreamliner is the first commercial plane with a composite fuselage, and the company is learning that the design — considered a boon because it makes the plane lighter and more efficient — could also make it more difficult to repair. 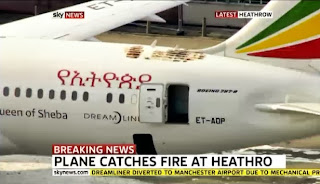 The company would not comment on the specifics of damage and repairs to the Ethiopian 787, citing the ongoing investigation, but a spokesperson told us it has "demonstrated designs and processes for composite repairs making it no more difficult than similar size repairs on metal airplanes."

Those processes are about to be put to the test, putting the plane maker in new territory.

In a post for Composites World, Jeff Sloan writes that the Ethiopian aircraft will require "possibly, one of the largest composite repair projects in aerospace industry." 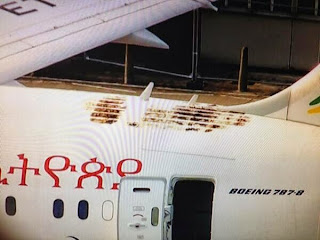 He adds: “And because the fire burned from the inside out, repairing the fire-damaged fuselage is not as simple as cutting away the damaged skin section and fashioning a patch. Stringers and other sub-skin structures must be assessed, replaced and tested — all a first for Boeing.”

Things are further complicated by Boeing's decision to manufacture sections of the fuselage as full barrels, instead of the usual way, in panels that are joined together. That choice, Boeing has said, reduces the number of parts on the plane and improves aerodynamic performance.

Jon Ostrower at the Wall Street Journal notes that during the early days of 787 manufacturing, Boeing suppliers sometimes had to throw out entire barrels that were flawed, when repairs cost too much money. 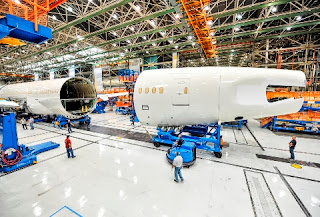 
For the Ethiopian aircraft, he adds, the full replacement of the damaged barrel may require "new tools to remove the entire tail of the jet and reattach and align all the parts."

Airbus, which is currently testing its own jetliner with a composite fuselage, the A350, stuck with the conventional panel method. Last month, we asked A350 communication manager Eric Ezell why Airbus didn't follow Boeing's example. He explained that using panels gives workers more room to maneuver during the construction process, and makes the plane easier to repair if necessary.

A350 XWB fuselage panels and barrel in the section 19

Considering Boeing's current predicament, it was a prescient decision.

Boeing, however, is adamant that the benefits of composites outweigh this sort of difficulty. Asked if this latest problem makes Boeing reconsider their use, a spokesperson said "Not at all."

Based on the article “Here's Why Damage To The 787 Dreamliner Is So Difficult To Repair” published in Business insider.