The key Trent XWB-97 engine is the flying testbed. Serial No. 26000 has arrived to the FAL in Toulouse where it will installed on the A380 MSN1. 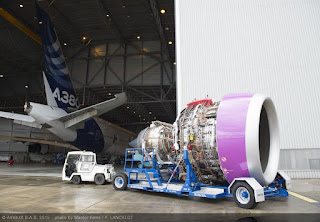 This engine is close to the production standard and will be the first engine to fly and all the tests associated with the production engine need to be created.


The engine run in July at Rolls-Royce and was delivered to Toulouse in early-August so Airbus now can pod it. 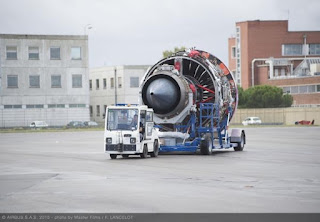 The 97,000-lb.-thrust engine due to fly in coming weeks is the 1st of 2 units destined for initial evaluation flights on the Airbus A380 flying testbed MSN001, and will be used for evaluating engine operability, relights and handling.


Beyond engine-specific testing, Airbus also intends to use the XWB-97 on the A380 for integrated nacelle tests. 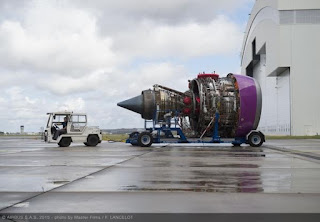 “It will do this to take credit for A350 certification and flights will run well into 2016, so it is not a short program,” said Simon Burr,  Rolls-Royce’s COO for Civil Large Engines

Unlike the -84, which first flew on the A380 in February/2012, the higher- thrust engine Trent XWB-97 will not have undergone simulated altitude evaluation in a test cell before it takes to the air on the flying testbed. 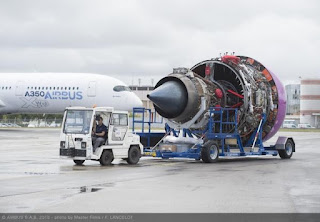 The flight testing on Airbus’s MSN1 A380 is designed to fine-tune powerplant integration and “de-risk” the flight test program on the A350-1000, expected to begin at the end of Q3/2016.


All pictures. Source: Airbus
Posted by Blogjfa at 8:54 PM