A350 engines being assembled on moving-lines and vertically at Rolls Royce site in Derby.

Rolls-Royce production assembly site in Derby is being upgraded and the $46 million invested are primarily focused on the installation of 4 pulsed lines, 2 of which are already in action. 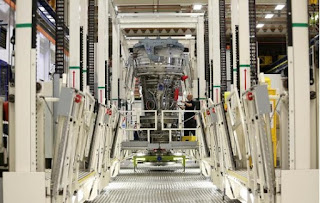 
The first 2 lines, one for the fan and one for the core, enable the units to be built up vertically, representing a break in tradition for Rolls.


Each line has 6 positions, with engines “indexing”, or moving position down the line from station to station every 24hr.

The floor of the line moves on rails, allowing the engine to shift to the next station without having to be craned into place, as was the case under the original assembly process.


The next 2 lines will provide a site for the horizontal integration of the fan and core modules and an area  for final preparations before dispatch; this includes borescope inspection, cleaning and packaging. 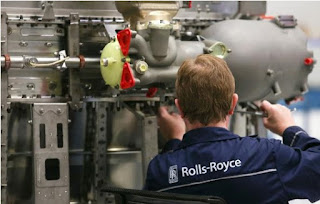 
The pulsed lines are “agnostic” to engine type and currently are being used to produce both Trent 1000s and XWBs. However, the investment is geared toward the coming growth in deliveries of the A350, firm orders for which translate into an orderbook for more than 1500 engines.

“The line will be used for building Trent XWB-84s and -97s, and mostly -84s over the next 2 years” said Simon Burr, Rolls-Royce COO for civil large engines. 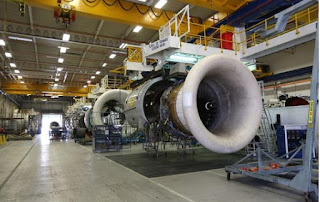 
“It is important to note that the investment in the industrial system and the development of pulsed lines reduces the time needed to build each engine, as well as the lead time. There has been a lot of effort put into the XWB to make production easier” he said.


Based on the article “Pulsed Plans” published in Aviation Week.
Posted by Blogjfa at 9:41 PM