Airbus said it will stick with the smallest variant of its A350 XWB family to provide a challenger for every version of Boeing’s 787, even after launch customer Qatar Airways switched to the A350-1000 bigger model.


Scrapping the baseline plane would leave Airbus vulnerable to the similar 787-9, Chief Operating Officer John Leahy said in an interview. 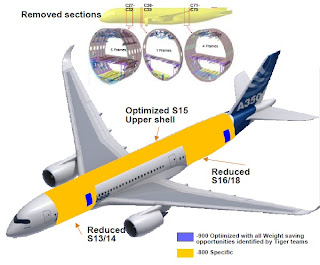 
Airbus is meanwhile looking at increasing production of the A330 to 11 aicraft a month, up from 9.5 now and 10 next spring, Leahy said. A330 orders continue arriving to Airbus headquarters.


Based on article “Airbus to Stick With A350-800 Even as Airlines Favor Bigger Jets” published in Bloomberg.