Main Landing Gear for -1000 will be so different.... 6 wheels bogie and manufactured by an american company

"The A350-1000 operates at higher design weights than the A350-900/-800 and features an all-new, 6-wheel main landing gear compared to the 4-wheel design of the other A350 models. Airbus launched a call for tender to secure best overall value for the A350-1000. After thorough evaluation of the competitive bids - covering a wide range of criteria - Goodrich was selected" said Airbus.

The contract with Goodrich covers the design, test, manufacture and in-service support of the A350-1000's main landing gear. 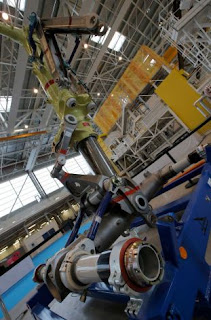 Goodrich says it expects to generate more than $2 billion in original equipment and aftermarket revenue for the firm over the life of the program. It says the work will represent "a global effort" involving Goodrich locations in Canada, the United States, Poland, India and France, as well as collaboration with Goodrich's global supply chain.

The question is why a new supplier for -1000 model instead of French Messier-Dowty as -900 variant?


Goodrich is not a new supplier for Airbus and for A350 XWB Program:


-Goodrich is providing all three members of the A350 XWB family's nacelle and thrust reverser system, wheels and carbon brakes, air data system and ice detection system, external video system and cabin attendant seats.
-Goodrich is providing the MLG for A380.
-Goodrich has a huge experience with Boeing´s MLGs and in 2012 has received a Boeing Performance Excellence Award for its landing gear business. The award is issued annually in recognition of superior supplier performance. Goodrich's landing gear business maintained a silver composite performance rating for the 12-month period from October 1, 2010 to September 30, 2011.


Finally and more curious: for A330/A340 the MLG is provided by Messier-Bugatti-Dowty but wheels & carbon brackets are produced neither by Goodrich nor by Messier; they are manufactured by Goodrich-Messier, Inc. a joint venture company which jointly design wheels and brackets and they do it very well:  Airbus recently recognized Goodrich-Messier Inc. with the Gold award for Best Improver for excellent on-time delivery and quality performance during 2011 inside the SQIP project (Supply Chain & Quality Improvement Program). “The Gold award resulted from a dedicated focus by cross functional teams from both companies on product harmonization and control which delivered zero rejects in 2011 with on-time delivery performance of 97 percent.”
For A350 XWB, wheels and brakets will be selected by Airlines between Goodrich and Messier, considering both will be certificated before EIS.
Posted by Blogjfa at 7:32 PM