USA350. Without American partners and suppliers participation, the A350 XWB would not be possible


Spirit AeroSystems, Goodrich and Parker Aerospace are only 3 members of the A350 XWB industrial team, and the example of  the growing contribution that Airbus is making to the US aerospace industry, with an increased spending nationwide that has doubled in the last 5 years and reached an investment of around 10 billion dollars last year alone.

Airbus is the biggest export customer for American aerospace, creating high-value jobs across the country. U.S. workers in 40 states help build Airbus aircraft – supplying parts, components, tooling, material and services from more than 400 companies. As a result, Airbus supports over 180,000 jobs in the United States. 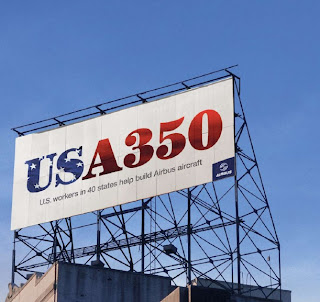 The USA350 advertising campaign highlights Airbus’ important contribution to the U.S. economy.
“Airbus is increasingly working with US-based high-tech companies” said Airbus Americas Chairman Allan McArtor. “Today hundreds of American companies in over 40 states and over 180,000 jobs are supported through Airbus’ partnership with the US. Airbus is extremely thankful for the steadfast leadership of American leaders and Mayors for his long-term vision and his continuous support to the aviation industry" McArtor added.

Since 1990, Airbus has spent $127 billion in the U.S. with hundreds of American suppliers. This supplier network involves some of the most respected names in American aerospace, including Alcoa, Eaton, GE, Goodrich, Hamilton Sundstrand, Honeywell, Northrop Grumman, PPG, Pratt & Whitney, Rockwell Collins and Spirit Aerosystems.


Just one example of how Airbus works helps to grow American companies is in Kinston, North Carolina. In 2010, Spirit AeroSystems opened at 500,000-square-foot plant there to manufacture the A350 XWB’s composite center fuselage frame. This major work package for Airbus’ newest aircraft underscores the company's commitment to growing its development and manufacturing activities in the United States and around the world.

“Partnering with Airbus on the A350 XWB is a significant step in our company’s history. Our new plant in North Carolina will employ as many as 1,000 people.” Jeff Turner President and CEO Spirit AeroSystems 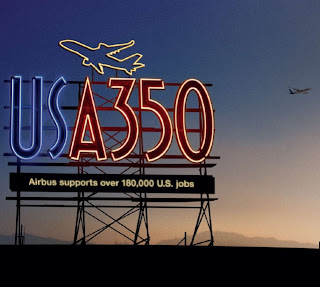 "Parker’s partnership with Airbus to help build the A350 XWB is providing work for our employees here in Kalamazoo and at seven other plants in seven states.” Greg Bierlein Vice President and General Manager Parker, Kalamazoo, MI

"The A350 XWB is an important program for Goodrich. Our work will be done at facilities in seven states." Marshall Larsen Chairman, President and CEO Goodrich Corporation
Posted by Blogjfa at 7:22 PM