Brégier: “We are satisfied with the past stages but there is more risk of delay than to be in advance”

Airbus acknowledges the first flight of the A350 XWB by mid-2013 won’t be easy. Airbus is trying very hard, though: there’s a lot of pressure to have the airplane at the Paris Air Show.


Airbus's CEO Fabrice Brégier said the goal to hold the first flight for the A350 XWB in mid 2013 is "not easy, but reachable". Mr. Brégier said the MSN001 aircraft is on schedule -with engines´ blade off test passed last week- though the calendar is "tight". 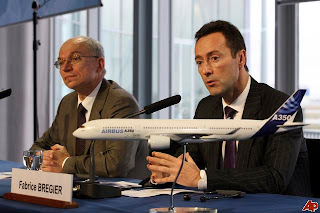 "For the program, the important thing is to fly in good conditions. For the A350-team, flying at the Paris Air Show in mid-June is an important goal".


Therefore, Airbus CEO has set internally to its A350-team the goal of the Airshow. "I don't want to make the same roll-out than the Boeing 787", summed up. "It was completely disassemble after that marketing operation". Because the 787 has known many technological and technical difficulties between its roll-out (on 07/08/07) and its first flight 2,5 years later (on 12/15/09). 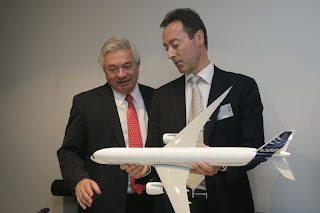