David Cameron visits Broughton facility to demonstrate his support to Airbus, only some weeks after the failed tie-up between EADS and BAE Systems

UK Prime Minister David Cameron visited the Airbus factory in Broughton to welcome the announcement of a deal for 100 new A320´s order that “will protect 1500 UK-based jobs at Airbus and a further 7500 in its wider supply chain”. 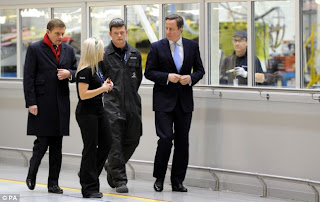 Prime Minister David Cameron said: “This is excellent news and a tremendous boost for the workforce and for UK manufacturing. Today’s announcement demonstrates the strength of the UK aerospace sector and the important role it plays in growing and rebalancing our economy. This Government will continue to back UK aerospace; cutting business taxes, investing in exports and working in partnership with the industry to ensure it is fully equipped to compete and thrive in the global race.”


The Broughton plant in North Wales assembles wings for a range of Airbus models including the A350 XWB. 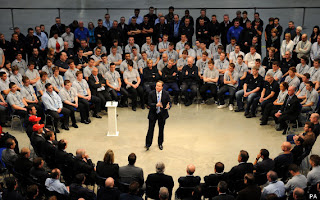 During a question and answer session with Airbus workers, Mr Cameron was asked about the failed deal between EADS and BAE. The prime minister said that the government was “positively engaged and committed” to Airbus. “We weren’t the ones putting barriers and hurdles in the way [of the deal]. It was a sign of how positively engaged and committed the UK government is to this company.” He welcomed proposed governance changes at EADS, which is controlled by the French and German governments through a series of direct and indirect shareholdings. 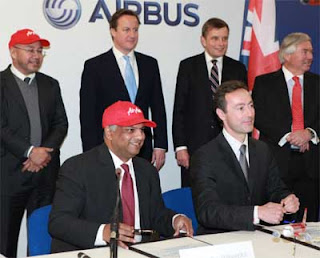 David Cameron joined AirAsia’s Group CEO Tan Sri Dr Tony Fernandes to tour the facility and meet some of the staff who will help build the aircraft. AirAsia is the largest A320 Family airline customer in the world, with 475 orders for the A320 family.
Tom Williams, Executive Vice President, Programmes and senior UK representative for Airbus said: “This order comes as a huge boost for the teams in Broughton and we are delighted to welcome the Prime Minister and the Chief Executive of AirAsia to the plant to see the skills and expertise of the team in action today.”

Airbus President & CEO Fabrice Bregier attended the event and will promote this type of events in the future in other Airbus production facilities, as they allow to join Airlines, Government representatives and Airbus in job-safeguard announcements, giving politicians the opportunity to redeem his image.


Based on article “David Cameron to unveil Airbus deal to safeguard 9,000 jobs” published in The Daily post, and on article “Cameron seeks to allay Airbus fears” published on The Financial Times.