Swiss needs more-fuel-efficient aircraft than A340 to operate the Zurich-Singapore daily service. And the best candidate is the A350-1000.

Swiss International Airlines plans to go head-to-head with its Star Alliance partner Singapore Airlines on the Singapore-Zurich route to take advantage of burgeoning business traffic between the two cities.


The airline is returning to Singapore on May 2013 with a daily nonstop service from Zurich, says Arved von zur Muhlen, head of sales and marketing international. The carrier will operate an Airbus A340-300, but needs a more fuel-efficient aircraft longer-term, he adds. SIA operates a daily Airbus A380 service.


"The A340 is not the most fuel-efficient, but it's great for passengers. In future we will look at replacing the A340. Only two aircraft spring to mind-the Airbus A350-1000 and the Boeing 777-300ER," Muhlen says. "We expect in the course of next year, there will be a decision. It's a Swiss and Lufthansa board decision and it [the proposal] is laying on the table." Swiss is part of the Lufthansa group. 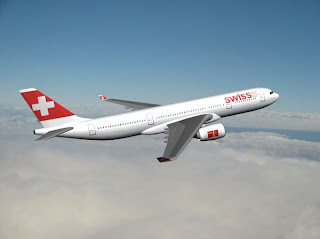 The Airbus A350-1000 would be appealing, Muhlen says, because Swiss believes it could fill a larger widebody on some of its routes, such as its flights to New York and Bangkok. He concedes, however, that the -1000 is still in development and that Swiss may be unwilling to wait. But he adds, "My personal opinion is that Swiss could get [second-hand] A340-600s as an interim solution," while the carrier waits for the A350-1000.