After only 10 months, the plant was qualified and supplying flap track fairings to Airbus for their A330s and A340s. This rapid turnaround would be a remarkable feat in any country, but considering that the factory site was only desert sand just a year before, the transition is even more remarkable. 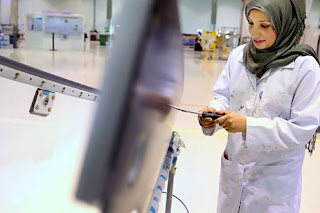 SABCA is the Belgian Tier-1 Risk Sharing Partner for the design, industrialization and manufacturing of the A350XWB Flap Support Structures and Flap Support Fairings.


Much of Strata’s success can be linked to the skills and quality of the individuals it employs. In the past 12 months, Strata has been able to raise the proportion of UAE nationals working for the company from 1% to 33% - the majority of which are women. This promising trend is the result of a well-constructed education engagement strategy designed by Mubadala Aerospace, implemented by Strata.

ATR and Boeing.
The first vertical tail fin to be built in Abu Dhabi for an ATR regional airliner has been delivered by Strata from its factory in Al Ain.
“With the first package completed for the ATR Vertical Fin programme, Strata employees have shown their commitment to supplying vital structures to the highest standards of quality," said Mr De Mitri, senior vice president Alenia. "We are now looking to extend this collaboration to other programmes. 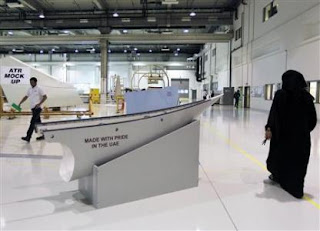 "If the UAE selects Eurofighter, we will be working with Strata to decide which packages it would be interested in delivering. We are no longer talking about a supplier relationship, where Strata just 'builds to plans', but a full technology transfer where Strata would become a full partner."
Under the current ATR contract between Strata and Alenia Aermacchi, as well as vertical fins, Strata will go on to manufacture rudders and horizontal stabilisers for the aircraft leading to it becoming the sole supplier of the whole ATR tail section, known as the empennage, delivering up to 50 sections a year. 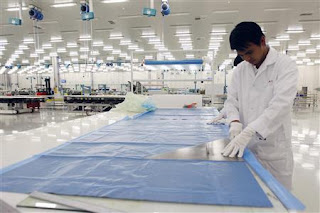 Mubadala's Strata Manufacturing plant in Al Ain that began operations in 2010, will initially manufacture ribs for the vertical tailplane of the 787, and full tailfin manufacture will follow once the plant and workforce have been brought on line.