The Ram Air Turbine emergency power system, known as RAT, is one of the backup power sources that are designed to automatically engage to ensure that those systems needed for continued safe operation of the airplane are powered, in case a failure of the power from both engines and the aircraft speed is above 100 Knots.

Theoretically, there is no time limitation for flying with the RAT. The Emergency Generator should remain supplying until touchdown; so the aircraft should never become 'Batteries Only'. 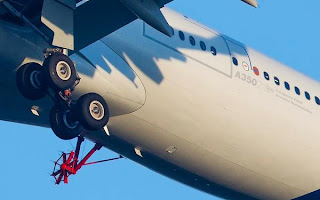 This small generator is required in the event of power failure and should be tested before the first flight
A ram air turbine (RAT) is a self contained turbine unit with a hydraulic pump attached that are generally only used in emergency situations.


RAT is deployed automatically when main system pressure drops below a predetermined value, and could also be deployed into the airflow by selection of a switch on the flight deck.


The RAT must be capable of operation over a broad speed range, maintaining normal hydraulic pressure, whether the aeroplane is at maximum speed and height or slowing for landing.


A volumetric flow control valve is usually fitted to the RAT allowing the propeller to attain operating speed, before being loaded by the pump, this allows full system pressure to be achieved approximately 4-5 seconds after deployment into the air stream. 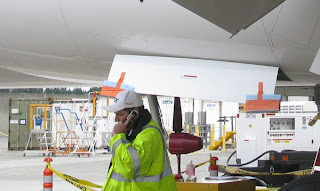 In the 787 (above) the RAT is stowed in the flap track fairing. In the A350 XWB, the place of stowage was initially under the left wing as shown in this old image below, but currently is under the fuselage fairing (belly fairing). 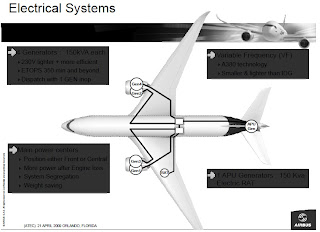 In the extremely rare loss of power from the engines, the RAT deploys into the airstream and produces power for the cockpit and flight controls to safely land the aircraft.
The RAT is designed&manufactured by American supplier Hamilton Sundstrand Electric Systems (a subsidiary of UTC) located in Rockford Illinois (USA) that also provides the A350 XWB’s Electric Power Generation System.


“We are proud to support Airbus’ latest advanced commercial aircraft. As the world’s leading RAT systems supplier, we strive to provide the best competitive and technical solutions for our customers, and we’re pleased to be selected for the A350 XWB.” 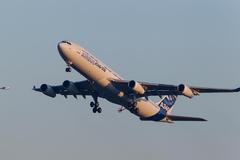 Airbus is using the same 21-year-old original A340-300 as development testbed for its investigation of acoustic transmission after installing a carbonfibre fuselage panel that could be seen in the same photo.