The 777X is a major upgrade to the highly popular 365-seat Boeing 777-300ER with a 4th-generation supercritical carbon fibre reinforced polymer (CFRP) wing and a new General Electric GE9X engine that reduces specific fuel consumption (SFC) by 10%.
Though no matter how promising the 777X will be, Boeing will have to move fast to launch the aircraft in order to fend off the threat posed by the 350-seat Airbus A350-1000. The A350-1000 has already secured blue-chip airlines as customers such as British Airways (BA), Cathay Pacific, Air Lease Corporation (ALC) and United Airlines and Airbus vows to unlock Boeing’s tight grip on its most loyal customers – Japan Airlines (JAL) and All Nippon Airways (ANA). 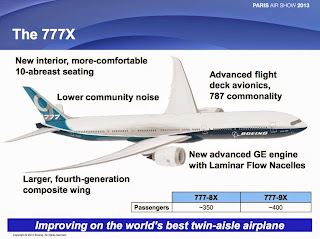 Yet Boeing is making good progress towards launching the airplane later this year, with strong customer demand from carriers such as Dubai-based Emirates Airline, Qatar Airways and British Airways (BA). After all, it is paramount to design an airplane well and ensure its design is competitive and solid before progressing to the next stage of development.
Once the 777X is launched, most likely at November’s Dubai Air Show, the competitive landscape in the widebody segment is poised to be altered as the final piece of the puzzle falls into place.