A350 XWB overweight estimated in 3 Tonnes. Not good but better than Boeing 787 aircraft number 90

Aircraft weight is key for competitiveness & performance. There are many type of weight opportunities that could be studied and implemented, such us challenging industrial &technical requirements, qualification of new material/components, structure optimizations, systems optimization, etc.

For the A350 XWB the public information available regarding the weight was that Airbus and the suppliers are working hard on weight reduction plans, as stated in an article in Arabian Aerospace:  “With the delays to the baseline A350-900, Airbus is battling huge weight and integration issues while Qatar Airways has probably had about enough of this sort of bad news and it's little wonder why they are now poring over their 787-8 options (of which they have 30) and look to convert these to the bigger 787-9s”.

According to Aspire Aviation‘s sources at the world’s largest plane-maker, the A350-900 is around 3 tonnes overweight although more change in part designs will enable more weight savings to be realised as Airbus begins flight-testing the airplane from mid-2013 onwards, which should be carried out carefully in order to prevent unintended consequences in overburdening the supply chain with change orders. 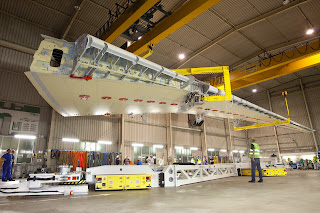 Excessive weight remains an issue, although the situation is allegedly much less dramatic than in the case of the 787.

Aspire Aviation has previously reported LN1 weighed in at 109.9 tonnes in manufacturer’s empty weight (MEW), 9.75t over the target whereas LN7 and LN20 are 6.1t and 3.99t overweight, respectively.
However, Aspire Aviation has learnt that a 787 customer due to receive a production example between LN66 and LN90, the first clean 787 with no travelled work and the first 787 planned to meet the aircraft’s original manufacturer’s empty weight (MEW) and airline-specific operating empty weight (OEW) targets, respectively, is still 4 tonnes overweight, thus rendering meeting the LN90 weight targets as “unachievable”, multiple sources at Boeing say.
The same sources attributed the likely miss in meeting the LN90 weight targets to a lack of abundant 787-9 parts, as the -8 parts are “over-engineered” and “well over-designed”.
The weight reduction programme on the 787-9 stretch variant is going on “smoothly”, with ZB001 or LN126, the first 787-9 example to be produced is to meet its manufacturer’s empty weight (MEW) along with the first batch of 787-9s, with the MEW of later-built 787-9s expected to be 2% lighter.

Based on article " Boeing remains formidable even if BAE/EADS merger goes ahead published in AspireAviation
Posted by Blogjfa at 9:07 PM