The left wing that will be fatigue-tested in Erding IABG has arrived Munich Airport in a Beluga transport aircraft. 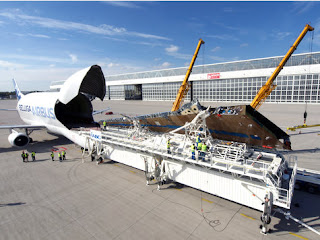 The wing will be shipped in a special truck to the 5000 sqm facility at Erding, where all the infrastructure required for the test (a transformer system with low-voltage distribution, hydraulic pumps, compressors and cooling systems) are just ready for test start. 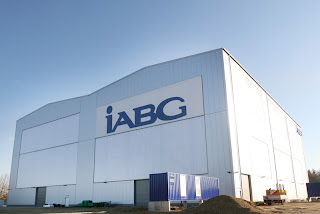 The new test hangar has been built based on a doble M philosopy: Modular & Mobile; the entire facility can be deconstructed and re-installed at another location, if required even in adapted configuration.


The second testing programme that will run in the new hangar in 2013 will be the EF2 aircraft structure tests on the Airbus A350 XWB. Test objective is the verification of strength, fatigue and damage tolerance of the metal components of the aircraft‘s primary structure, for which Airbus - for the first time - is mainly using composite materials. 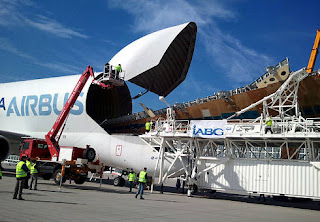 The item under test in the context of the EF2 campaign will be the centre fuselage section including wing box and both wings, while the EW test that will be run before, examines a single A350 XWB wing, primarily focusing on the various materials (CFRP components, metal). In addition, this test wing will be used to examine the newly developed connecting areas of the main landing gear and the engine pylons. The EW will simulate 43,200 flights which loads will be simulated with 41 servo hydraulic cylinders.

The test results are an essential precondition for the certification of the A350 XWB.
Posted by Blogjfa at 10:56 PM