More delays in the EIS Entry into Service of A350 XWB?

After the last EIS delay announced by Airbus last July, where the EIS of the A350-900 was slipped from 2nd to 3rd quarter in 2014, there are some rumors of additional delays.

Saj Ahmad analyst is tweeting that the EIS of the A350-900 is now projected to slip into the first half of 2015. It should be noted that for almost a year now, Bernstein Research has been of the opinion that EIS would slip into the second half of 2015.
These "headlines" are an example:


Qatar Airways, along with Etihad Airways and Emirates, all three are braced for more A350XWB delays. For its part, Airbus is potentially looking at losing millions in compensation and also in orders too.

Saj has also tweeted that the A350-1000 is heavily impacted by each delay to the A350-900 and therefore EIS for that model is moving past 2017 and the Arab airlines are still unhappy with the design changes Airbus have made and Emirates may be looking to drop the rest of their order for this model. 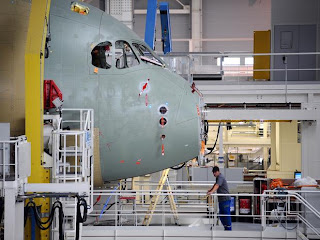 Static Specimen in the Final Assembly Line in Toulouse

Credibility of these rumors? Low, as of today, but it is interesting to know some pro-Boeing view of some analysts.